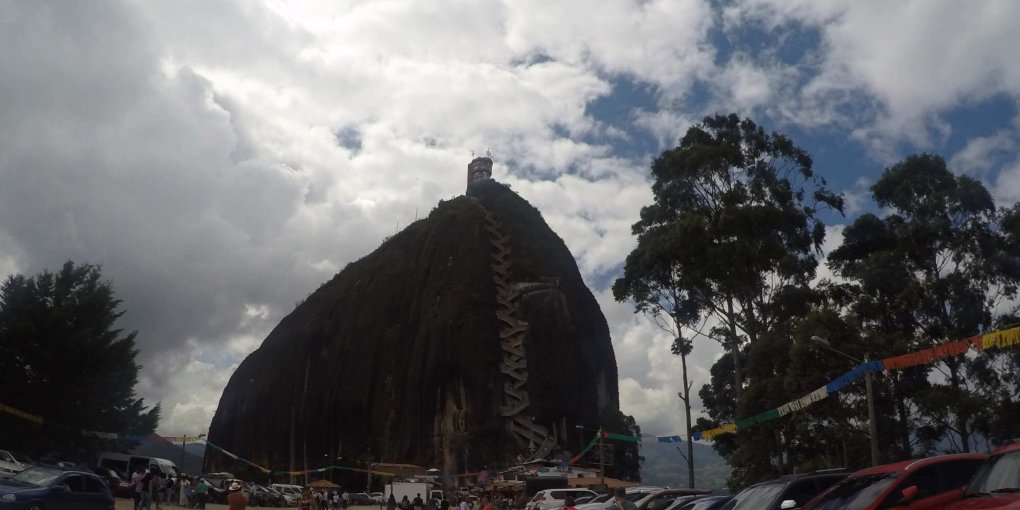 Known by many as the Stone of El Penol, La Piedra, El Peñón de Guatapé or most popular, the Rock of Guatapé, the monolithic rock formation in Colombia has intrigued visitors and inhabitants for thousands of years.  Originally recognized as a well-known boundary between homesteads and farms and the cities of Guatapé and El Peñol, reaching an elevation of over 2,135 metres, the 66 million ton estimated weight creates a lasting impression on the landscape of Colombia and the Andes Mountain Range. 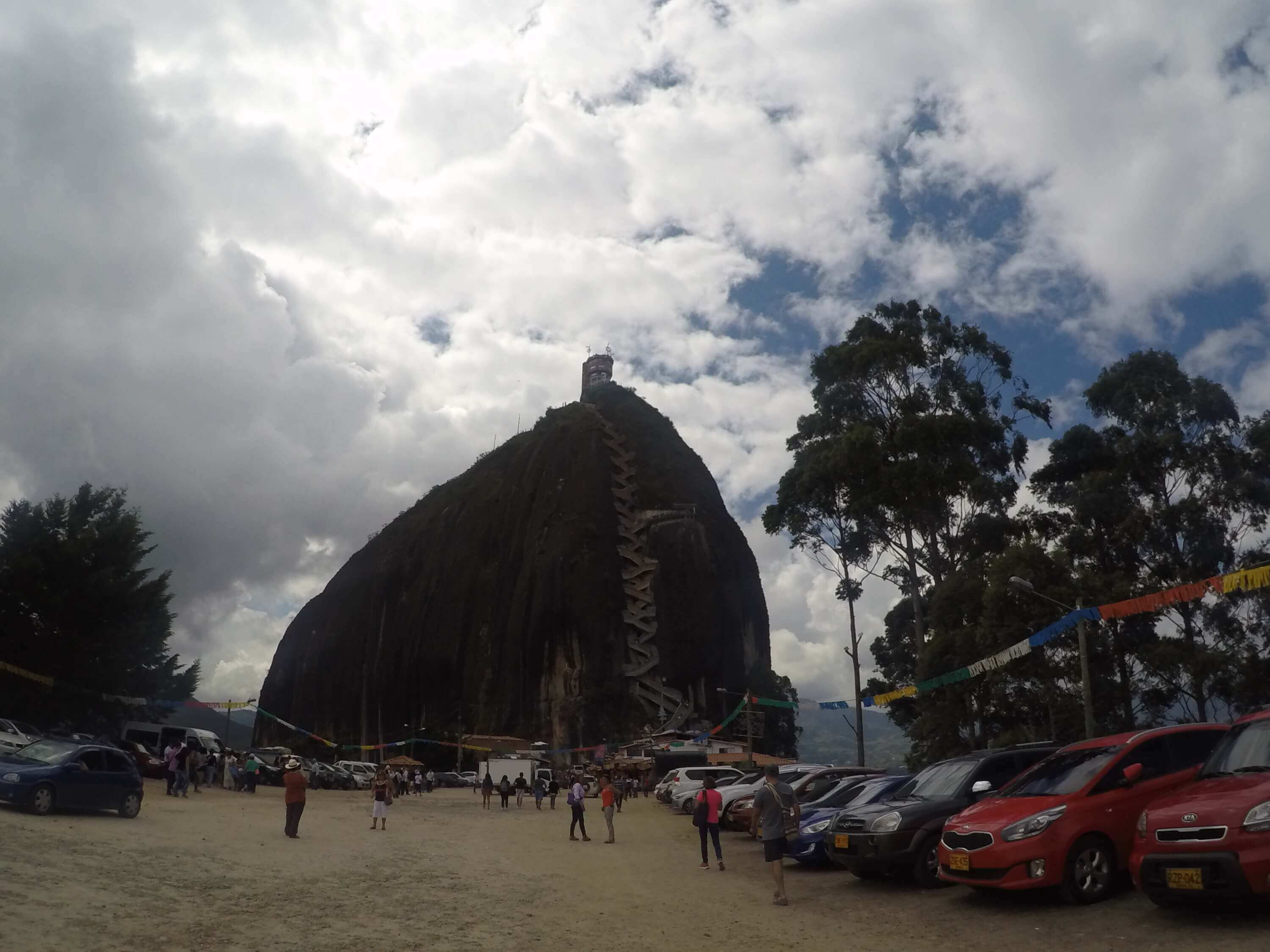 Throughout the rock formation, there are numerous breaks; one of which has now been constructed with 650 stairs that allow visitors to go to the top of the rock and venture further into history of geology of the region.  With thousands of visitors every year and with such intrigue from around the world, the Rock of Guatapé has had a compelling history and one to remember.

The earliest known inhabitants of the region nearest Guatapé Rock are that of the Tahamies Indians.  The Tahamies Indians saw Guatapé Rock as a place of worship and a formation that became known as “mojarra,” translated as rock or stone.  The two bordering cities nearest to Guatapé Rock, the city of Guatapé and El Penol, have maintained a longstanding dispute over ownership of the Rock, itself, and infamously painted large white letters on the northern-most face of the rock- “G” and an incomplete “U”.  The visual illustration was the attempt of Guatapé to stake their permanent claim to the rock, but the only two letters, “G” and “U”, were left to stand alone when residents of El Penol decided to form a large mob to stop the continued painting of letters and “claim” by the city of Guatapé.

Although thousands of visitors now climb the rock every year, taking in nature’s true beauty, the first official climb to be recognized in record occurred in July of 1954 after being identified as a National Monument by the government of Colombia in the 1940’s.  More recently, in 2006, a group of 3 adventurers took a daring climb over the course of five days while using sticks wedged against the wall of the rock.  By marking a route that could be used by more climbers in a more reasonable fashion, the 3 adventurers of 2006 have now helped to pave the way for thousands of visitors every year to make the climb to the top of Guatapé Rock and gaze at the amazement of the Colombian landscape that surrounds. 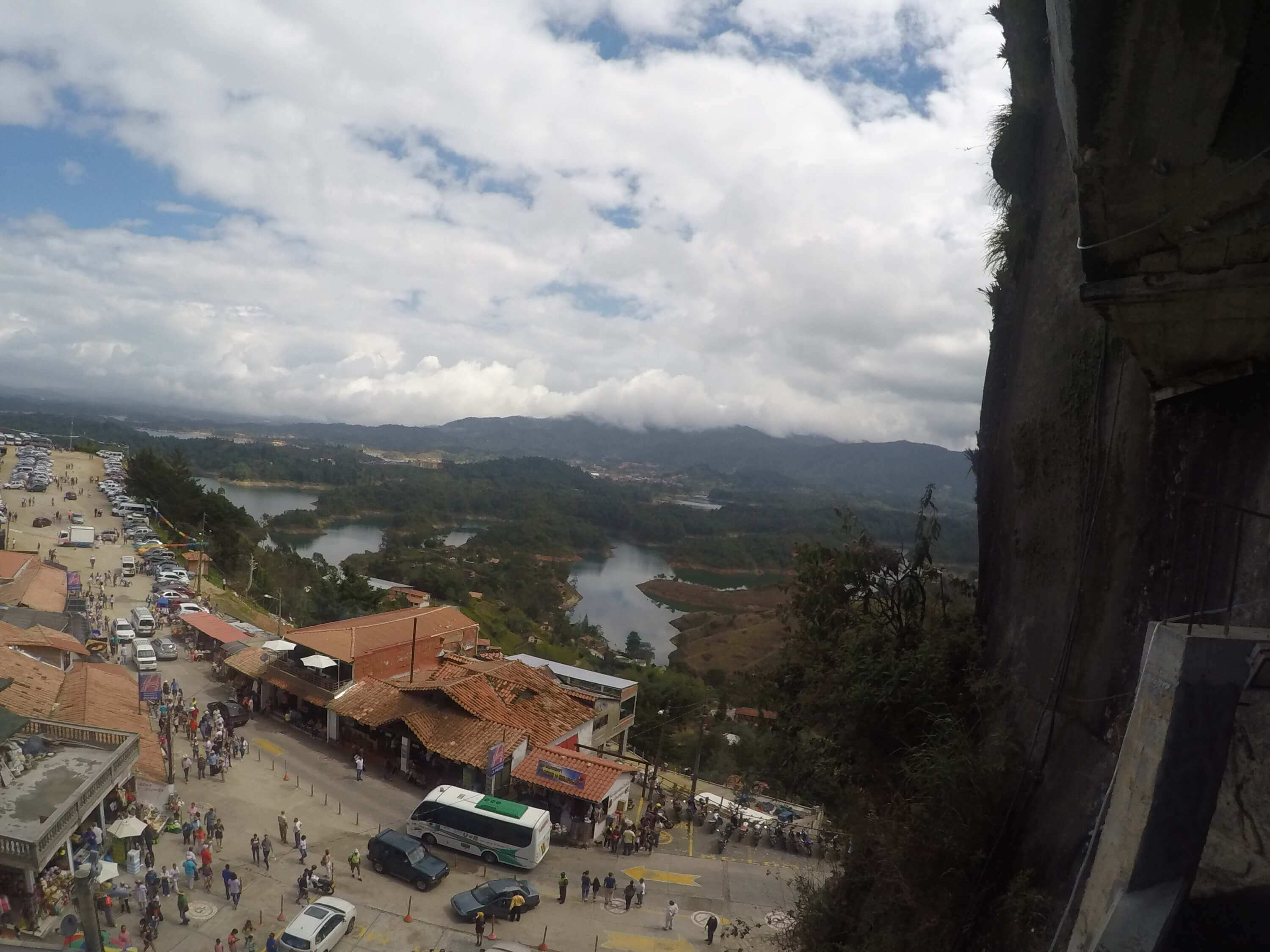 The Rock of Guatapé is so unique in geology and environmental composition, that it even has its own species of plant that was found on top of the rock, known as Pitcairniaheterophylla.  In addition to taking in the unique site of Guatapé’s own plant species, visitors can also take in a specially designed viewing spot where individuals can purchase handicrafts, postcards and Colombian-trademark goods.

How to get to The Rock of Guatapé

There are countless options and variations in creating a memorable trip to Colombia, but one of the best trips to embark to Guatapé Rock is from the city of Medellin.  Approximately 2 hours away from the population destination of Medellin, the journey to Guatapé will be memorable in and of itself and is easily completed by following three simple directions:

At an elevation of 2,135 meters above sea level, and over 385 meters in length, Guatapé Rock stands out from the landscape and will be noticeable from great distances in all directions, making the final stretch of the journey one of great anticipation, excitement, and wonder for what is to come at the end of the climb of 740 steps to the top, towering over Colombia. 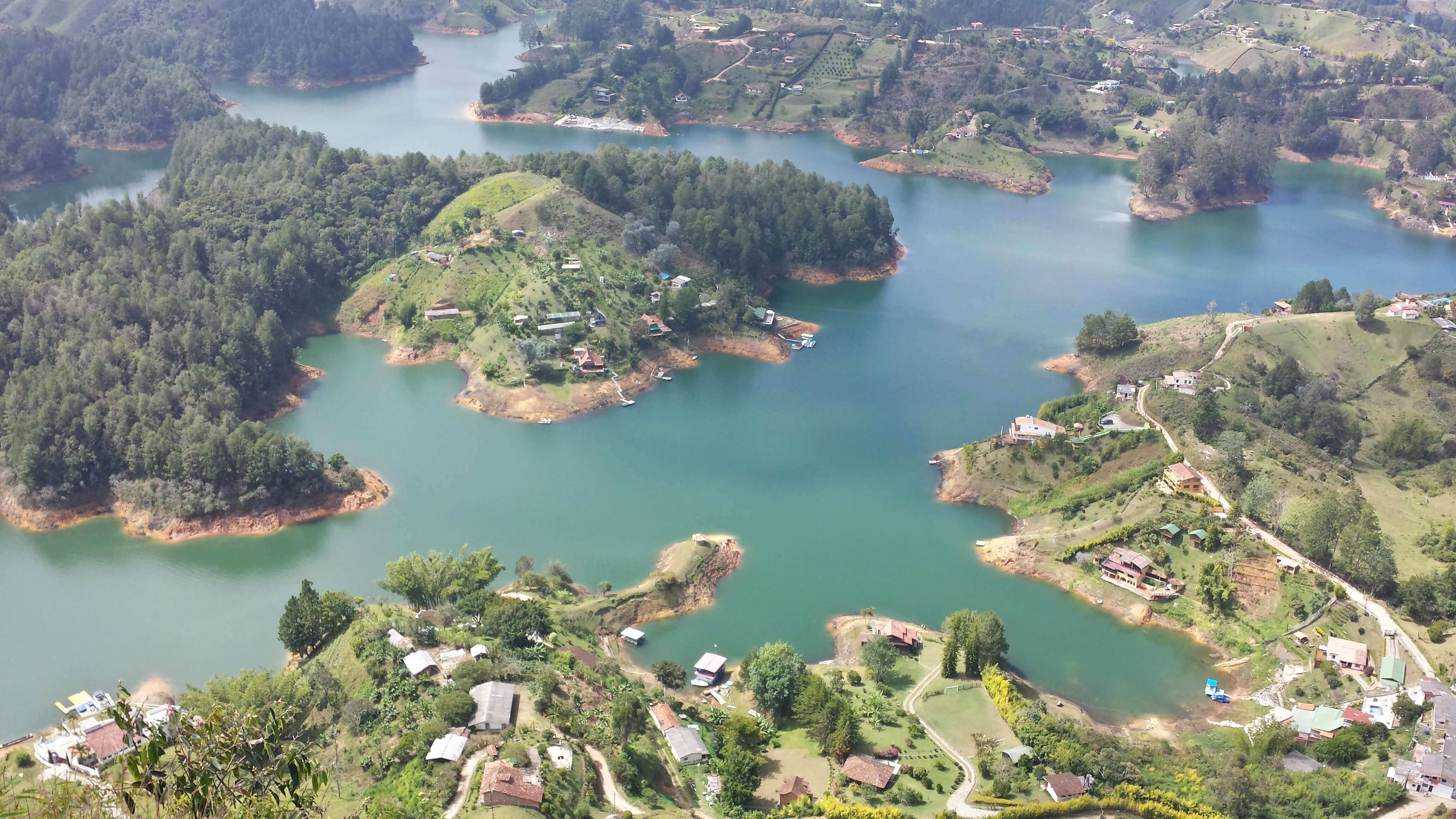 There are three primary hotel options nearest Guatapé Rock that each provide incredible views and accommodations within a reasonable distance to the most memorable climb of an adventurers life in Colombia.  If the view of Guatapé Rock is one that stands out in the memory of travelers and adventurers to Colombia, then a stay at Hotel Los Recuerdos will be equally of grandeur.  With the Rock of Guatapé rising from the landscape directly behind Hotel Los Recuerdos and amenities such as a lap swimming pool, spa, and beach volleyball court with rooms from standard to suite, this hotel will meet the needs of any traveler to the Guatapé region looking for top class.

For those looking to balance travel, accommodation, and a more reasonable price tag, a stay at Hotel PortobeloGuatapé may be more in alignment.  Being one of the most recommended places to stay in Guatapé to be able to enjoy the heart of the town to the fullest while receiving very clean and simply refreshing accommodations, Hotel PortobeloGuatapé ranks highly among the available options in the area.  With incredible water-views available, a refreshing and simple stay at Hotel PortobeloGuatapé may be just what an adventurer is looking for after a long day exploring what Colombia has to offer, including the trek to the top of Guatapé Rock.

The third recommendation for staying in Guatapé is that of Hotel Guatatur with friendly service, comfortable amenities, and proximity to almost everything to be desired in the center of Guatapé.  As compared to the previous recommendations of Hotel Los Recuerdos and Hotel PortobeloGuatapé, Hotel Guatatur falls short on the ability to provide breathtaking views, as rooms are more narrowly designed; however the ability to be centrally located provides travelers and adventurers, alike, the ability to easily get out and explore. 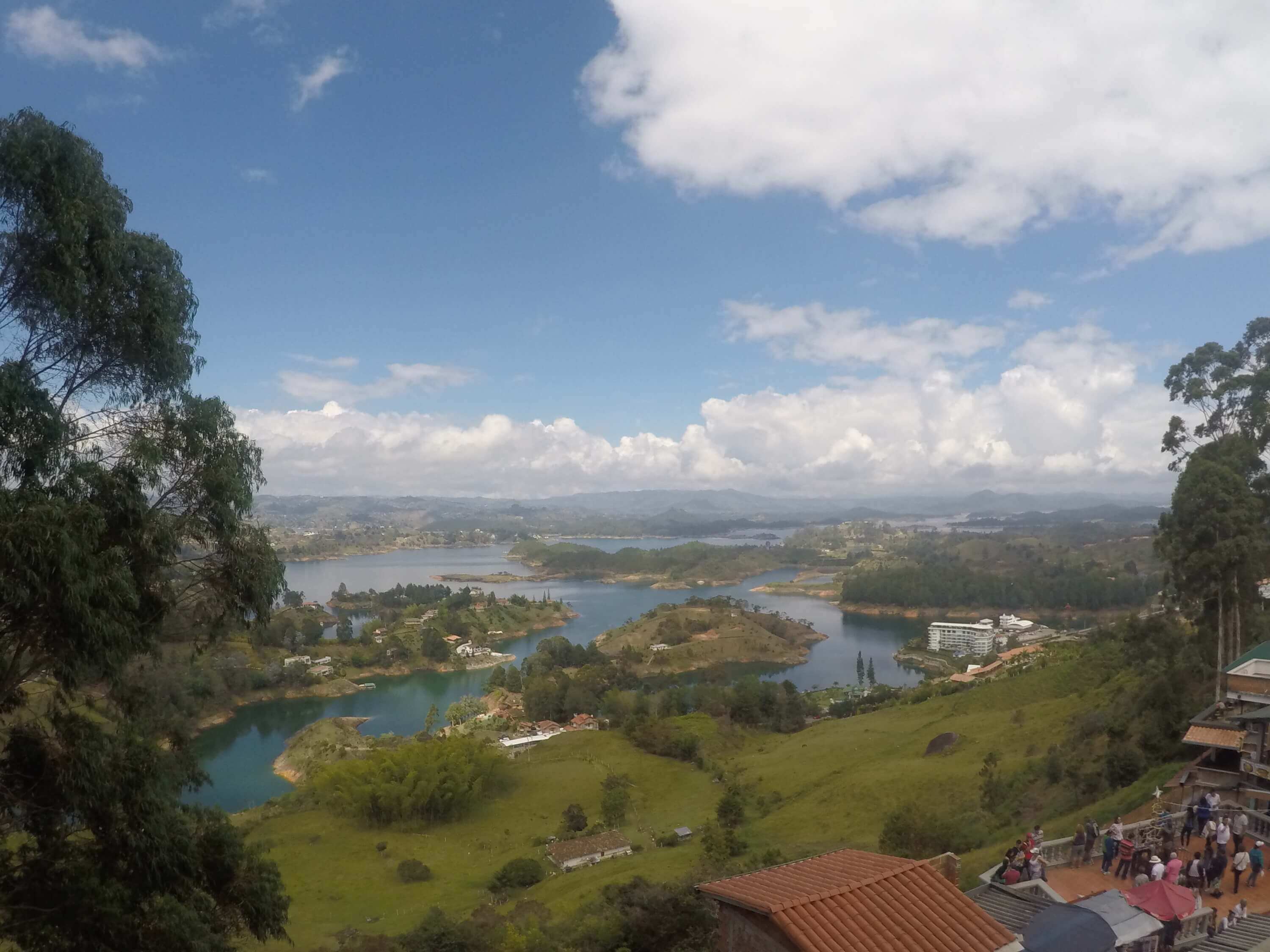 The country of Colombia is unique in climate, in that it is characterized for having five diverse climate zones, identified as being tropical rainforest, tropical savanna, steppe, tropical desert, and mountain climate.  Depending on where one decides to travel and at what time of the year, he or she may experience every season of the year within a day’s time by traveling across the country of Colombia.  Guatapé Rock, recognized as reaching a higher altitude, stretched above the landscape, finds itself in the middle of a tropical rainforest climate that borders more closely to a subtropical highland climate.  As compared to other parts of Colombia, Guatapé Rock finds itself staying at much lower temperatures as compared to other locations at the same latitude near the equator, with an average temperature throughout the year of 22 degrees Celsius, or 72 degrees Fahrenheit.  With a “springlike” climate throughout much of the year, Guatapé Rock welcomes visitors any month of the year with the ability to leave a lasting impression on the mind and soul. 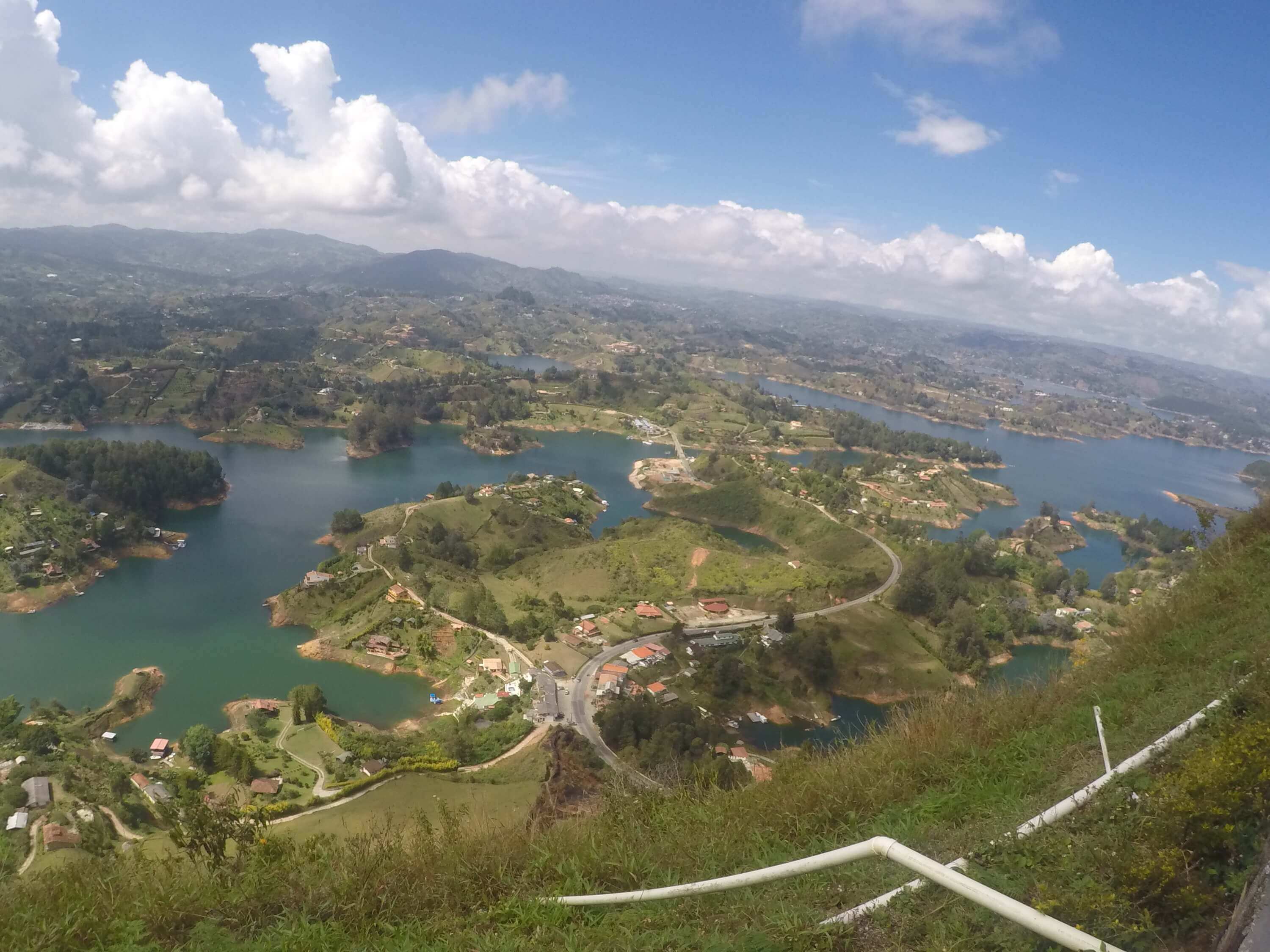 Other Things to do Close By

Visiting and climbing Guatapé Rock is an adventure not to be missed and will be one to remember for a lifetime; however, there are other options available to take part in as an adventurer in Colombia and within close proximity.  A short distance from Guatapé Rock, and one of the main transportation hubs that brings visitors to Guatapé on a daily basis is that of Medellin, another great cultural center found in Colombia, rich in tradition and history that can be easily indulged on an adventure to the region.

Home to many festivals and events throughout the year, Medellin is an exciting location for adventurers in Colombia.  The Festival of the Flowers, held in July and August, provides multiple activities including a colorful parade that highlights artistic saddles that are filled with flowers and has even been recognized internationally for its superior beauty.  And for the linguistic artists from around the world, the International Poetry Festival, recognized for being awarded the Right Livelihood Award, brings participation from over 80 poets that represent over 50 nations from around the world every year in Medellin.

Near Guatapé Rock, adventurers in Colombia also find themselves near Guatapé Lake.  With daily lake tours from Medellin, visitors can take private tours and sail trips around Guatapé and El Penol lakes and take in even more natural beauty that Colombia has to offer.  A lake tour can provide a romantic experience and relaxing atmosphere that may be highly welcomed the day after taking on the climb of Guatapé Rock.  For those not interested in the relaxation or romance of the experience, the adventurer spirit will be sparked once again when the lake tour takes visitors past Pablo Escobar’s bombed Lake Mansion that had once shadowed over the edge of Guatapé Lake.

The Guatapé Rock region, known by inhabitants and visitors for thousands of years as a location of superior natural beauty and splendor, is one not to miss when the opportunity presents itself.  By taking part in a personal adventure by climbing to the top and taking in the sites and culture of the surrounding culture of Colombia, visitors to the region will not soon forget the traditions developed by the competing cities of Guatapé and El Penol that each worked to claim Guatapé Rock as their own, making Guatapé Rock part of their personal “own” as well. 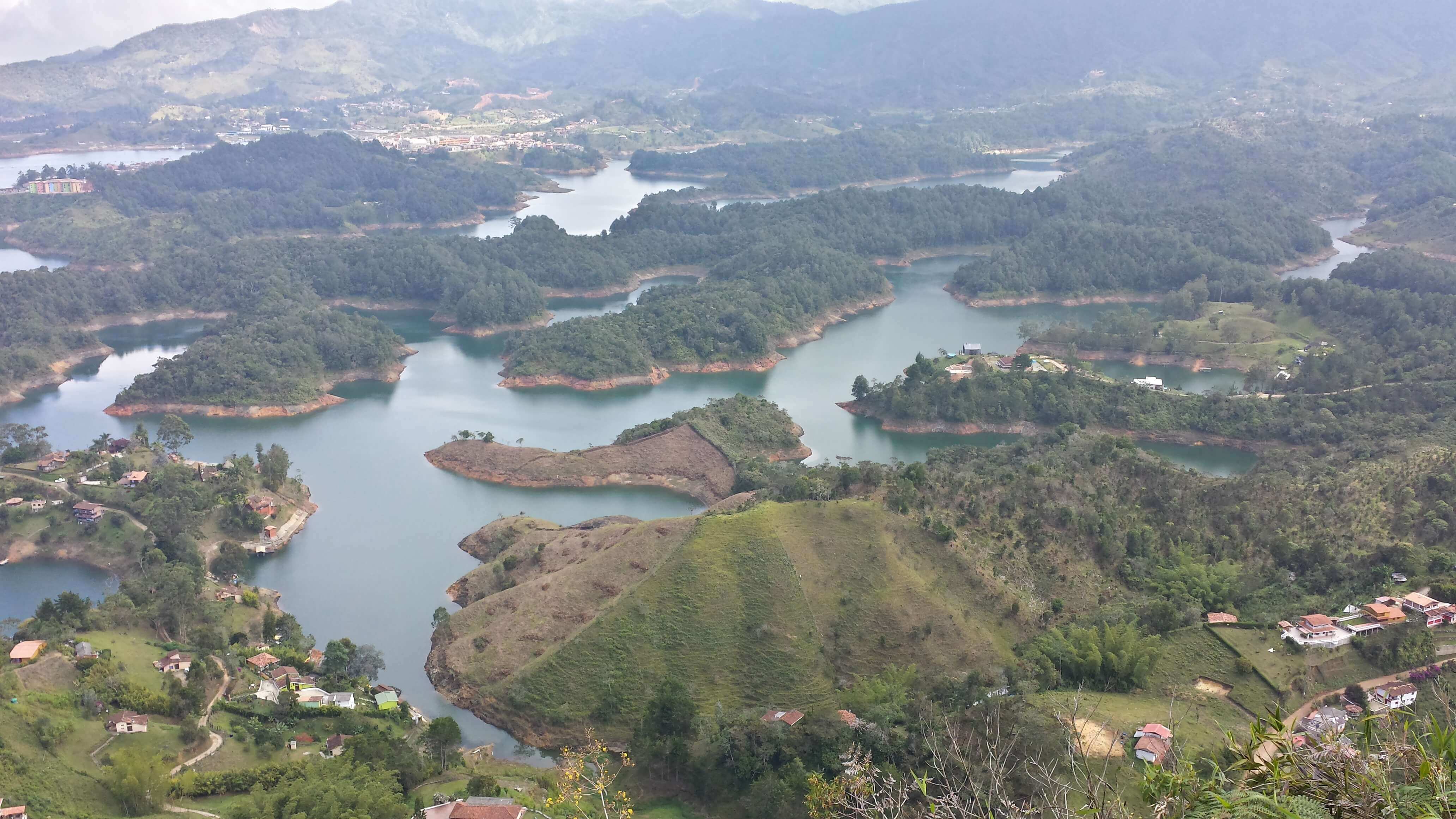