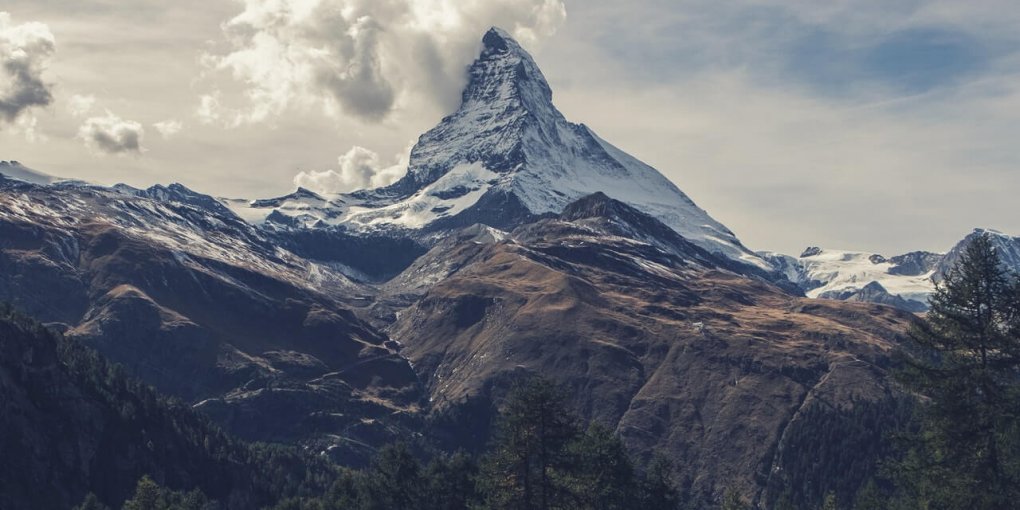 Mountain climbing is known as a challenging and yet rewarding activity. Professional climbers are also out there to challenge their way up another great mountain. Grab back yourself esteem with some of these mountains in Europe and experience scenic views of valleys from the mountain peaks. Catching a sunrise on top of these highest peaks on a clear cloudless sky will make you appreciate just how much the earth is beautiful. 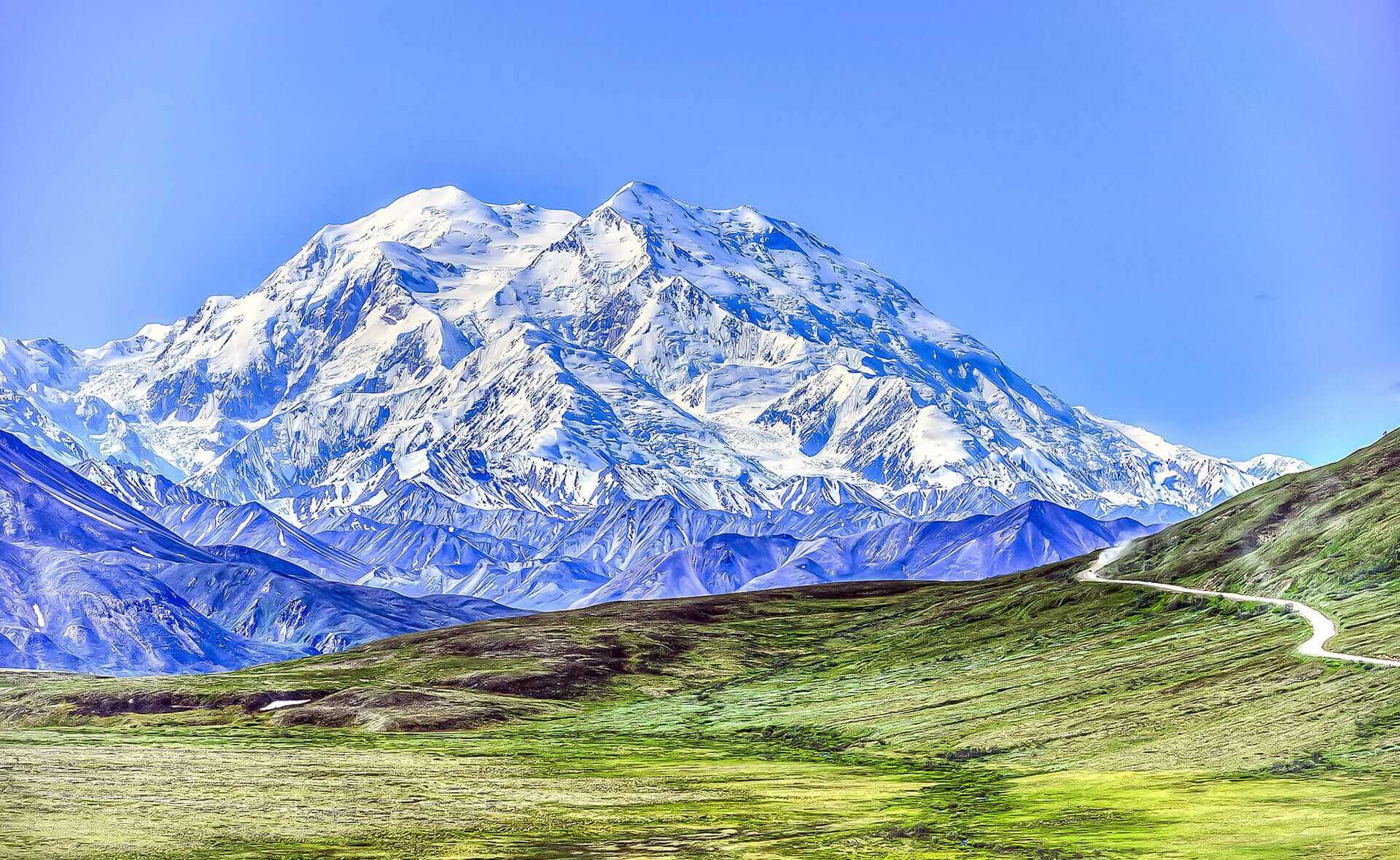 This mountain is the highest in North America. The height of the mountain from the base to the apex is about 20,320 feet (An average 6,194m). This mountain is ranked as the third most prominent and isolated peak after Mt Everest which is the first and Aconcagua which comes in second. Located in Alaska, Denali is the main piece of Denali national park and reserve.

Denali has two major summits located in the South and North with the South one being the highest at 6,194m.although the North peak is smaller, it is rarely climbed but sometimes it is climbed by those doing routes on the northern side.

There are five large glaciers on the slopes of the mountain. The longest glacier is the Kahiltna Glacier which leads to the south-west of Denali Mountain. This glacier measures 71 km (41 miles). The first attempt of climbing the mountain was done by Judge Wickersham in the year 1903 but because of the threat of avalanches, there were no successful climb untill1963.

It is one of the mountains in the world with the most breathtaking views. The mountain is tremendous in size making it ideal for climbing and photos. The best time to scale this geographical beauty is between May and June. Afterward, it’s a bit unsafe because of avalanches and open crevasses that have unfortunately claimed a few lives.

It is a common challenge path for experienced climbers due to its harsh course. It attracts thousands of tourists annually although not all make it to the peak. This mountain is sure to put a mark on the minds of those who make to its peak.

So what is the highest mountain in Europe? 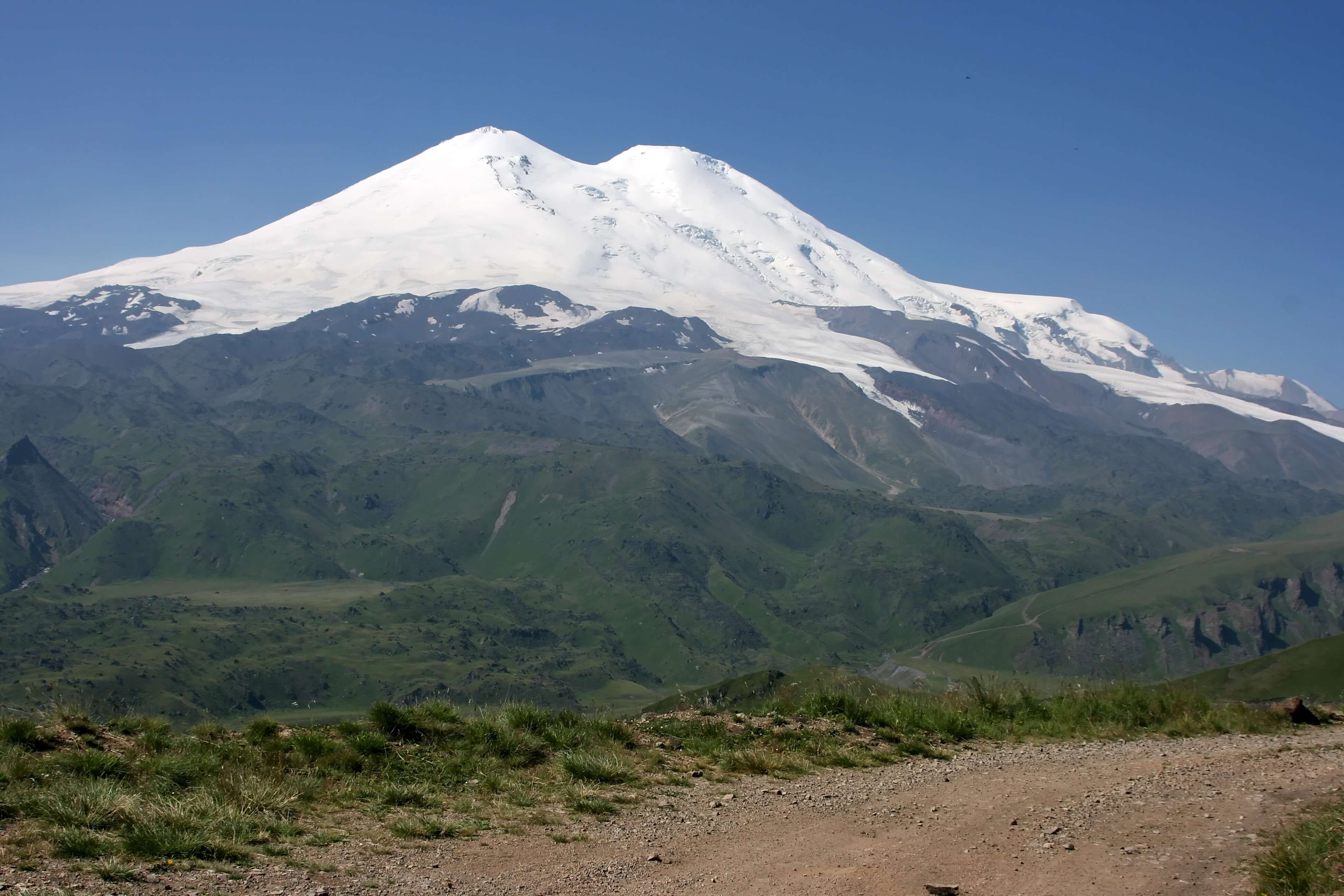 This is the tallest mountain in Europe. It is a part of the Caucasus Mountains in the southern parts of Russia. It is part of an inactive volcano. The mountain has two summits that are well recognized. One is the west summit at 5,642metres (18,510 meters) and the other is the east summit at a height of 5,621metres.

This mountain is recognized as a tough challenge although some of the most popular climbers boast of climbing it. It is ranked as the tenth most prominent mountain peak in the world. It is also equipped with a few resorts that work out just well for tourists. It also has huts for sheltering and resting on the way up. Most climbers have been known to take less than a week in climbing this mountain.

The Mountain has various trails through which professional and amateur climbers can reach the peaks. This mountain also attracts professionals who ski and snowboard from early January till June when the weather gets warmer.

The best time for climbing Elbrus is July and August when the weather is stable. The rich have been known to partly climb this mountain by cable car partly. The cable car ends at 3,658m where they then take the standard route up the southern side of the summit. Taking the cable car makes it easier for you to explore the mountain and get the panoramic views of this mountain. 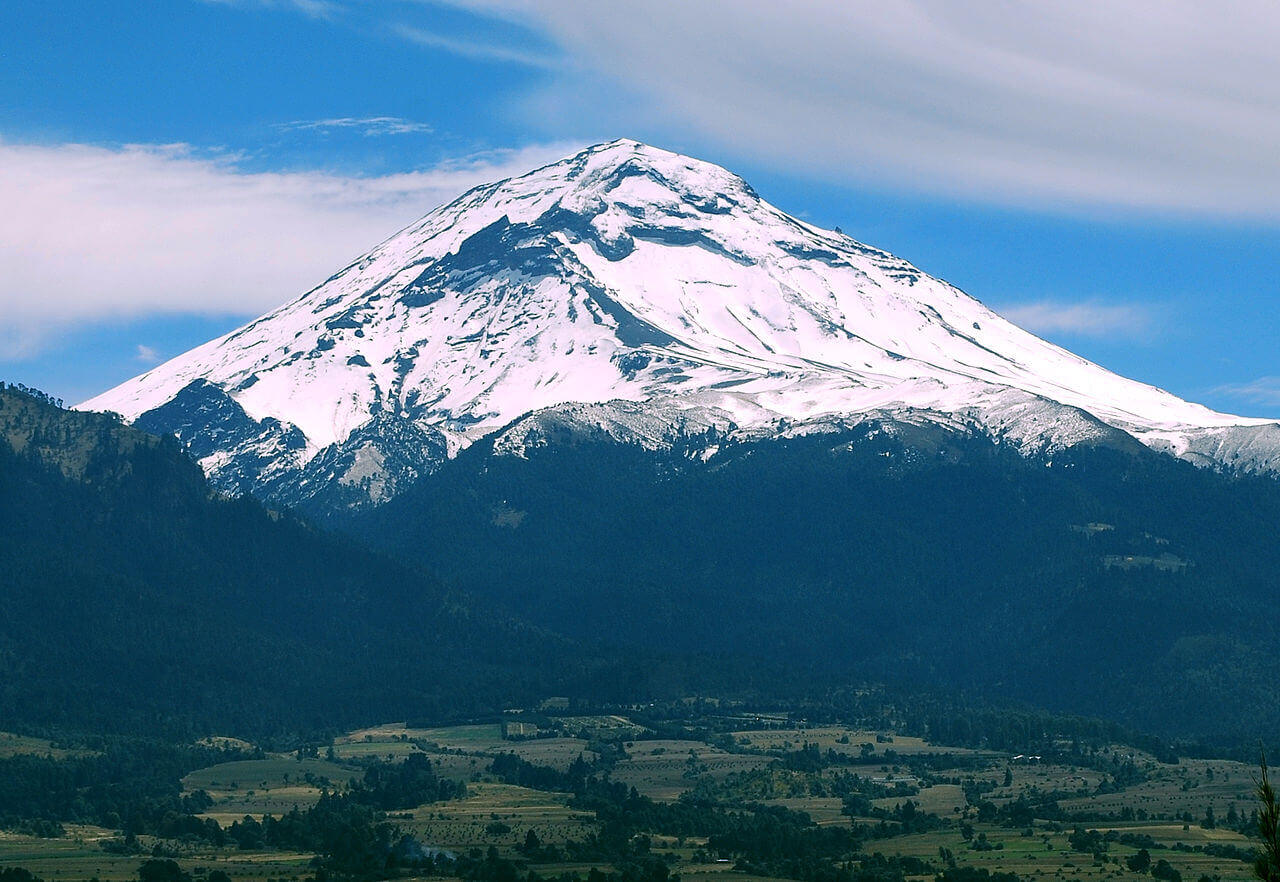 This mountain is averagely 1200km south of the US border it is also known as Pico De Orizababa. It is best accessed from Mexico and it has a height of 18,406 feet (5,614 meters). It is quite close to another mountain that is called the Mount Iztaccihuatl that can also be accessed from Mexico. The Ieztaccihuatl Mountain is also high with a figure of 17,159 feet. (5,233 meters)

The mountain has a dormant volcano and is the most popular climbing scene in Mexico. The last eruption of this mountain took place during the 19th century. It is said to be the second most prominent volcanic peak in the whole world after Mount Kilimanjaro in Africa which is the first on the list.

There are also regular tourist spots with mountaineering being on top of the ‘to-do’ list when you visit this peak. The snowcapped peaks of this mountain are nicknamed `white woman’ because they seem to look like the physical aspects of a sleeping woman.

Located about 110 km on the west side of Port Veracruz, the peak is visible to the water vessels approaching this port in the Gulf of Mexico. Pico de Orizaba is asymmetrically positioned to the center of the volcanic crater with the eastern side being the steepest. The northwester side is the most gradual side of the volcanic peak and this makes it possible for large glaciers to form. This side is also the most traveled route for hikers wishing to reach the top of the peak. 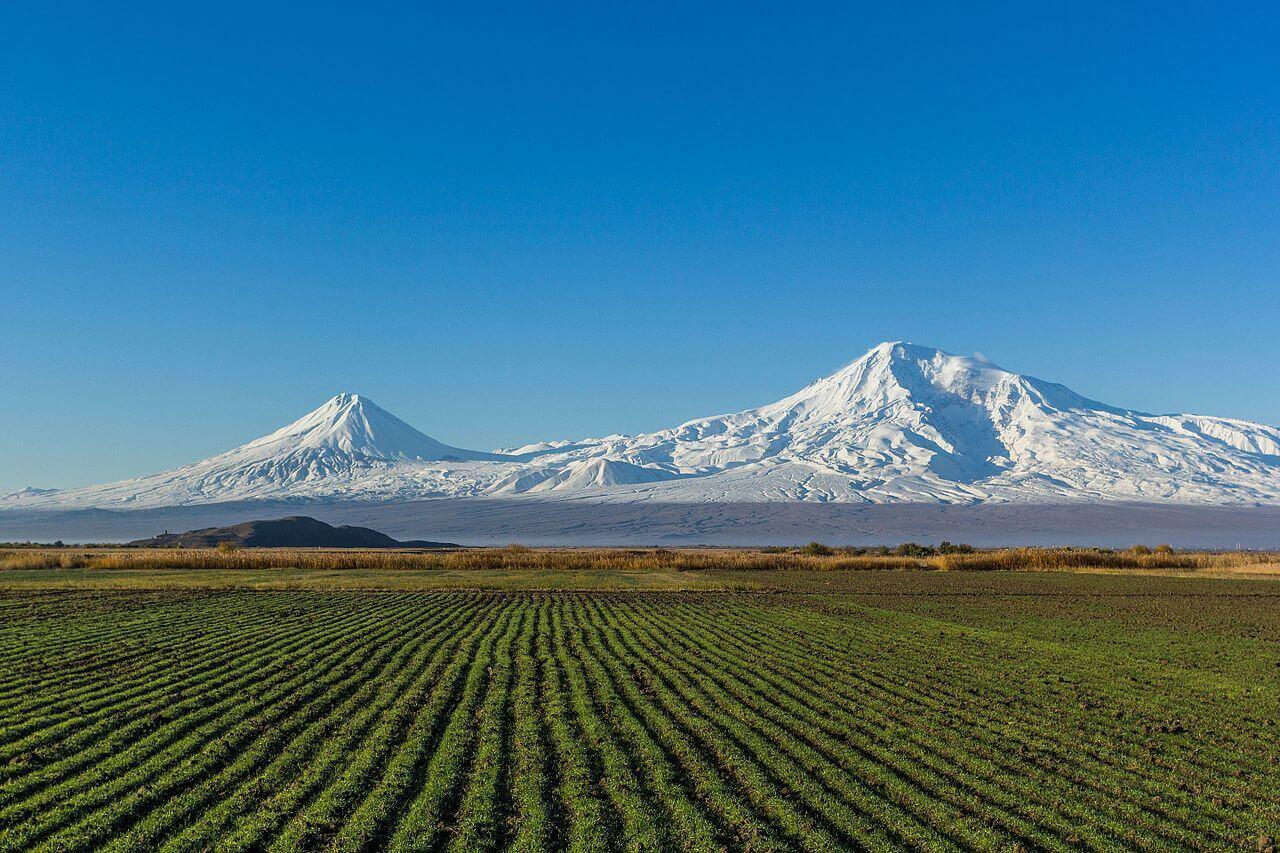 This mountain is quite popular and is the tallest mountain in Turkey. Climbing this mountain will definitely make other mountains seem like dwarfs. Mount Ararat is a dormant compound volcano consisting of two major volcanic cones. With the Greater Ararat reaching 5, 137 meters in height. The Little Ararat measure 3,896 meters.

The Mountain has an ice capped summit which has been recorded to be shrinking since 1957. For mountain climbers, fresh water can be found after the sun comes up to melt the snow.

This mountain has a rich history behind it as it is said to be the point of landing for Noah’s Ark. As a result of this history, this mountain considered sacred and is the principal national symbol for the Armenian people. Climbers and hikers are often required to get a permit before climbing. Once you get this permission, it is advisable to start by jeep from Dogubayazi and travel across the valley to reach the base of the mountain. Here you can then engage the local tour guides for a small fee. The climb up and down can be comfortably completed in four days.

First efforts to reach the peak of this mountain were made in the middle ages but successful attempts were first recorded in 1829. This attempt was made by Friedrich Parrot accompanied by other four people. 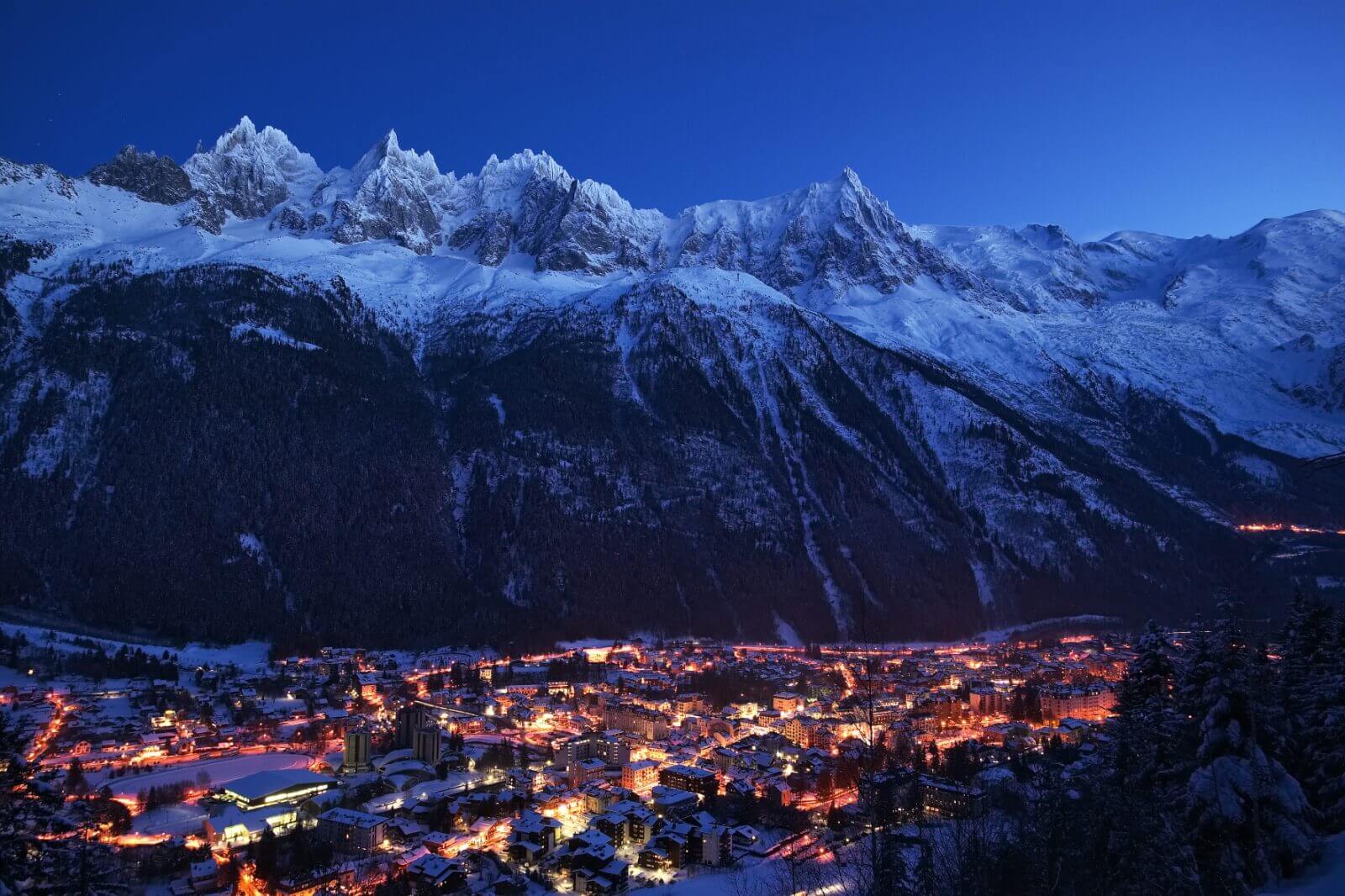 The Mont Blanc is also known as the White Mountains and is the highest mountain in Europe west of Russia’s Caucasus peaks. It is listed as one of the highest mountains of the Alps of France and Italy. It is estimated to have a height of 15,781 feet (4,810m). Mont Blanc is ranked 11th for the most topographic prominence. It was first ascended successfully in 1786.This ascent gave way to the beginning of the modern mountaineering as we see today.

The Mont Blanc is a designated winter sports site and is famous for resorts that are popular with skiers, snowboarders, hikers and even mountaineers. The mountain offers a state of the art and modern mountaineering to tourists and locals who visit the mountain regularly.

The mountain is known to host more than 20,000 people annually. The best route for climbing the mountain is the Voie Des Cristalliers it is also the most popular for climbers. This route can be considered technically easy while at the same time hard by someone who is well trained, fit and acclimatized to the altitude.

This mountain is one of the most visited tourist destinations and many view it as a threatened site and want it protected. As a result, it has been put forward as a consideration to be classified as a World Heritage Site. This is also in part because of its cultural importance in the community, considered to be the origin of mountaineering.

The mountain also records having the Europe’s two highest toilets at 4,269 m. these toilets serve over 30,000 skiers and hikers annually which helps alleviate urine and feces discharge which spread down the mountain side with the spring thaw. These toilets are serviced by helicopters. 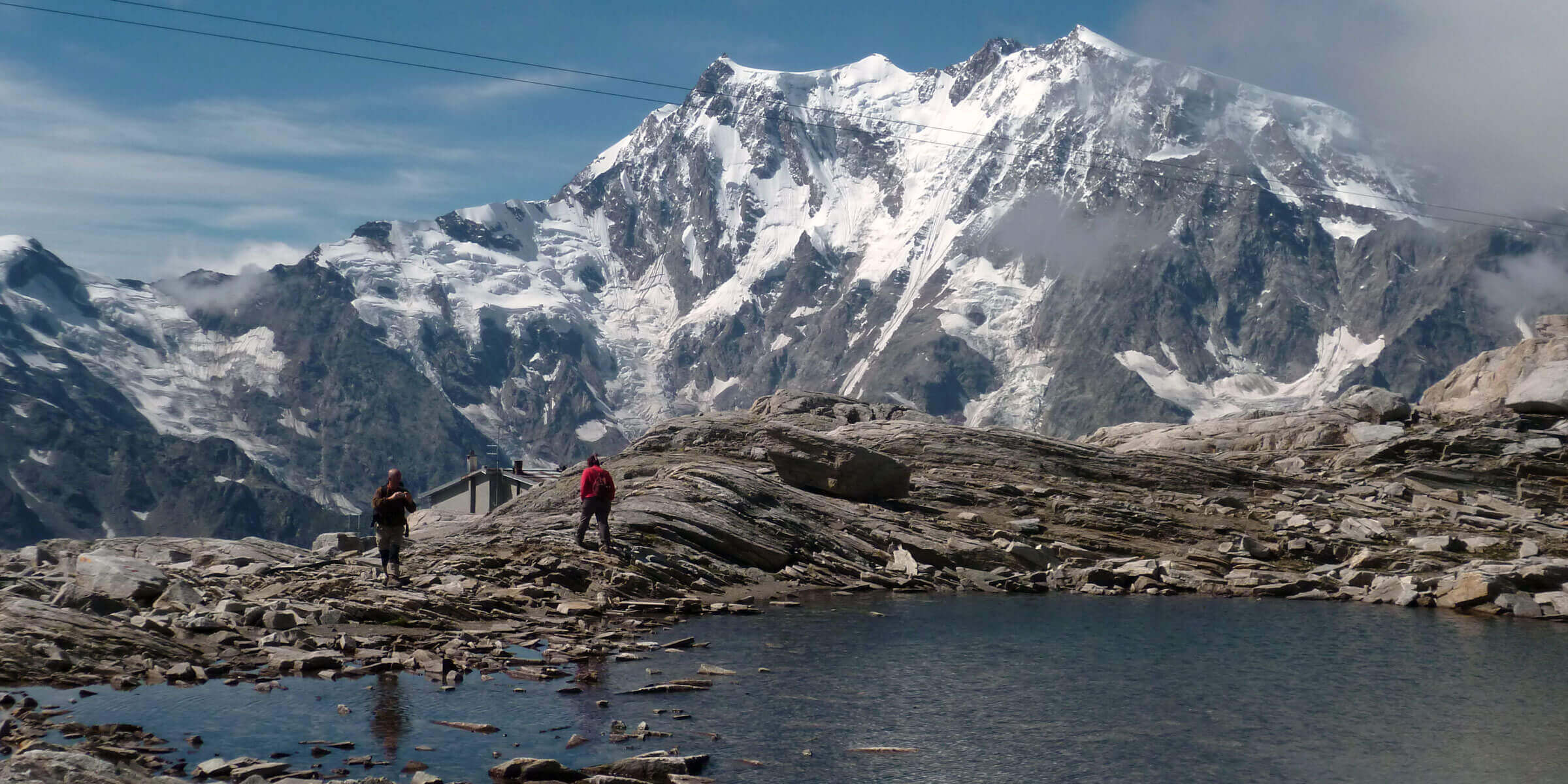 This mountain is 15,203 feet high (4,634 meters). It is the highest peak located along the Swiss Pennine Alps. This mountain is covered in ice and located on the watershed between the North and South Europe. The highest peak Dufourspitze measures 4,634 m followed by five summits which are almost equal in height.

The mountain is spread over the region on both sides of the border between Italy and Switzerland. The two main summits lie on the Swiss side. The mountain is a popular tourist spot with visitors engaging in different activities like hiking skiing and snowboarding.

The famous Tour of Monte Rosa that many engage in takes about 10 days. The tour follows ancient trails that have linked the Swiss and Italian valleys for many years. Major views to see include but not limited to alpine meadows, glacial crossing and balcony trails. The mountain has one of the most extreme weather conditions. The lowest temperature to be recorded was -40 degree Celsius. It is nearly impossible to move at the top because of a prevalent of a high wind blowing from the east and sometimes north east.

The Monte Rosa Mountain was first climbed in 1855 August by a team of 8 adventurers. It has two common routes that are used for reaching the peak. The Monte Rosa was made famous by making an appearance as ‘Monte Bosa’ in the notebook of Leonardo Da Vinci. 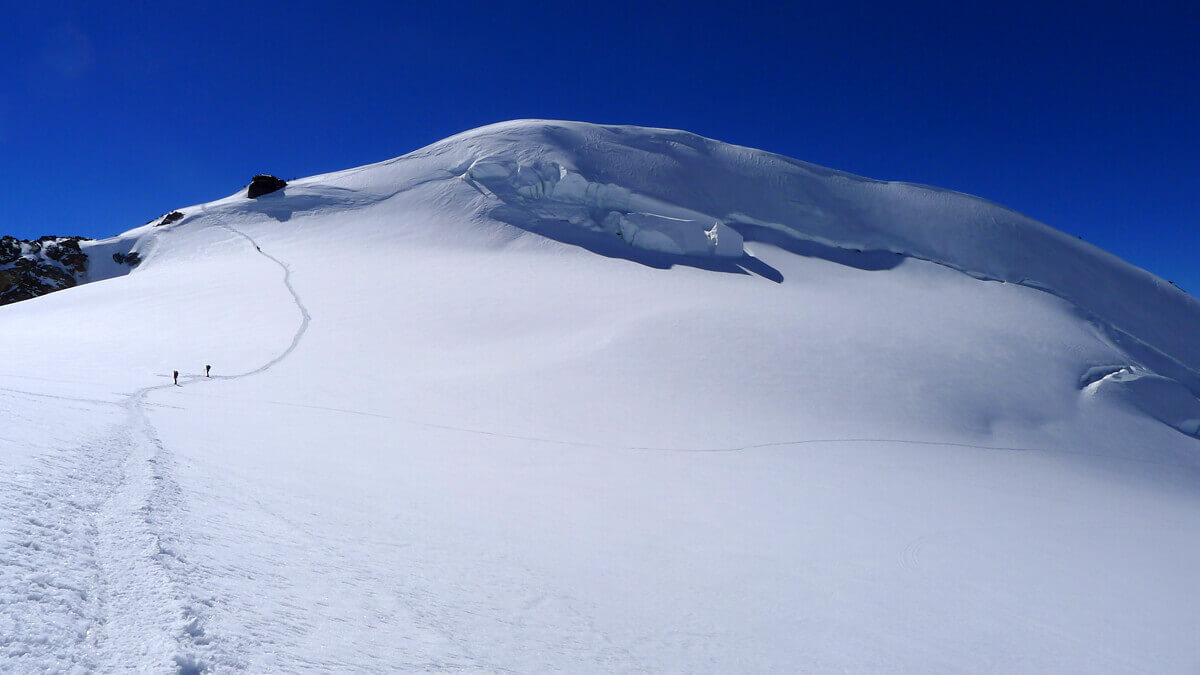 The Signalkuppe is famous for having the highest hut within Europe; the hut is named the Margherita hut and was opened officially by the Queen in 1893. 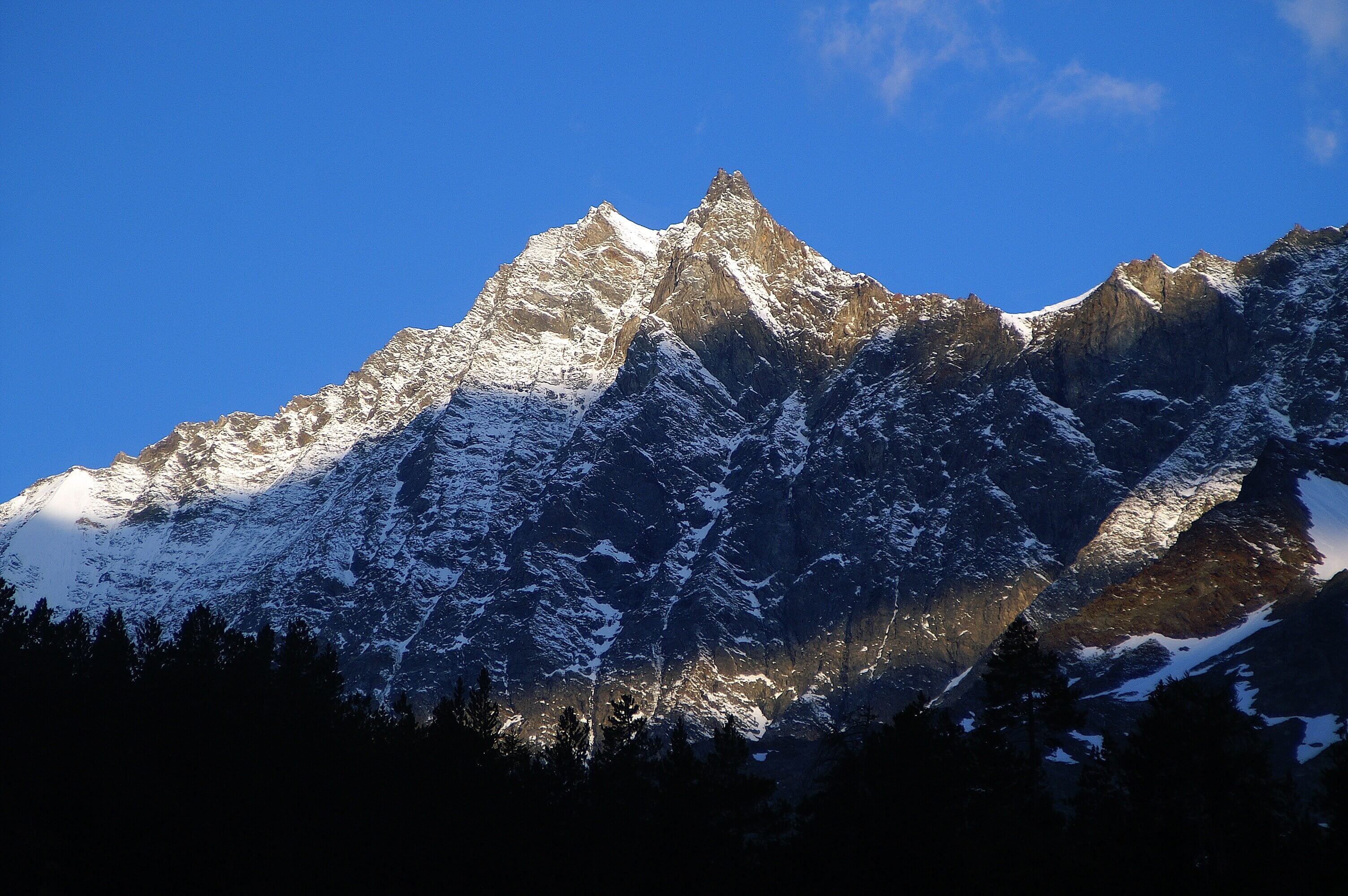 Mount Dom is known to be a stunning 14,911 feet high. (4,545m) it lies in the Pennine Alps of Switzerland. It is a regular tourist attraction and is regarded as one of the easiest climbs in Europe.

This great Mountain also has a few tourist resorts and a cable car for those who are not ready to meet the challenge. The climb requires an overnight stay at a regular spot off at Dom Hut which needs pre-booking. The earliest ascending of this Mountain that is documented was in 1858 by Reverend J.L. Davies.

Climbers can also hire equipment at the base of the mountain. The best place to start the most popular climbing course of this Mountain is at Randa. It is a small town on the Mountainside that has a number of tourist attractions. 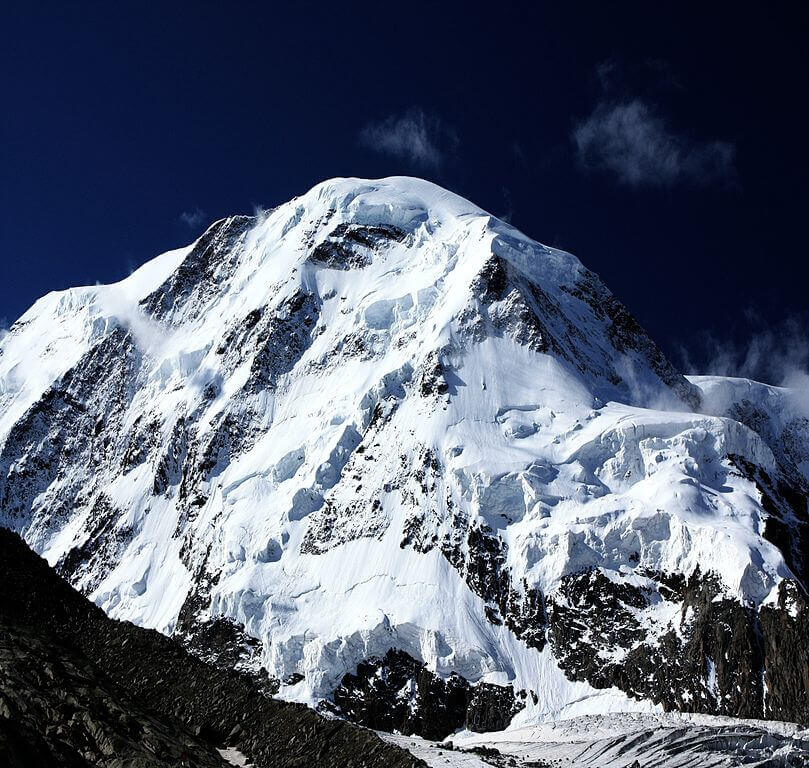 The principal peak measures 4,538 meters high and originates from the parent Monte Rosa. The climb is a major challenge as the hikers must climb an estimated Distance of 5 kilometers along the ridge to reach this peak.

The climbing route followed today was originally taken more than 150 years ago. The first ascent was done by a largely British team in the year 1861. 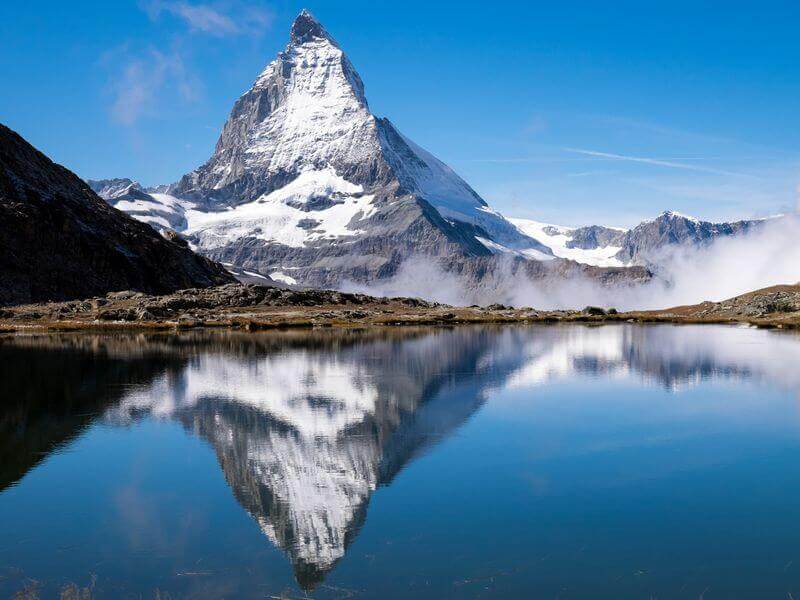 The Matterhorn lies on the Swiss Alps. It is one of the most popular mountains in Europe. This mountain’s peak is known to have a height of 14,962 feet an estimated 4,478m. It is a big geographical landmark that offers just the right amount of challenge for any climber.

The peak of the mountain is best defined as a chiseled rock pyramid. This makes climbing a deal for the fittest of the fit. It was also classified as a most dangerous climb in the Alps. Technology has enabled a railway steps installation all the way to the peak.

This mountain is the birthplace of the sport of mountaineering. Many climbers who have already climbed return annually for purposes of the purists’ tradition of climbing.