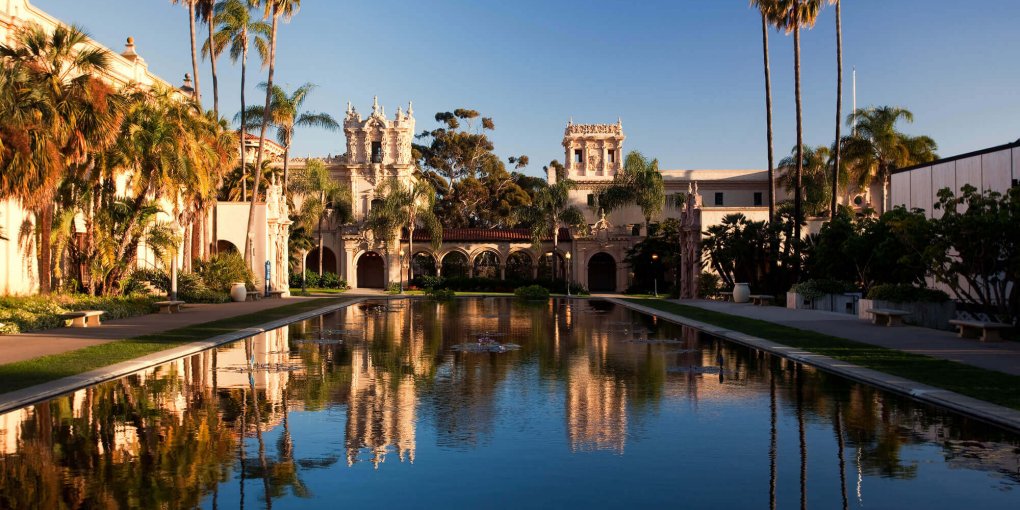 San Diego is a city with a thriving nightlife and bags of exciting attractions to keep visitors of all ages entertained throughout the day. It’s possible to experience too much stimulation though, and while the temperature rarely reaches the stifling levels sometimes associated with California thanks to the cool breeze provided by the sea air, many visitors may find themselves pining for a tranquil afternoon spent outside.

Thankfully, the city also boasts a raft of green parks and public gardens – not least the just short of 3 square miles reserved for Balboa Park alone, which will be covered in our entertainment guide.

There are in the region of 40 public parks and gardens spread throughout the city, where you can just simply sit and enjoy the tranquility, or a cooling ice cream (watch the litter – heavy fines are imposed). It is important to recognize whilst in San Diego, that some parks may be determined as reserves and vice versa, and in the word reserve alone, San Diego has strict governing laws regarding the protection of nature reserves and parks – don’t fall foul of the law, but there are plenty of signs to remind you. 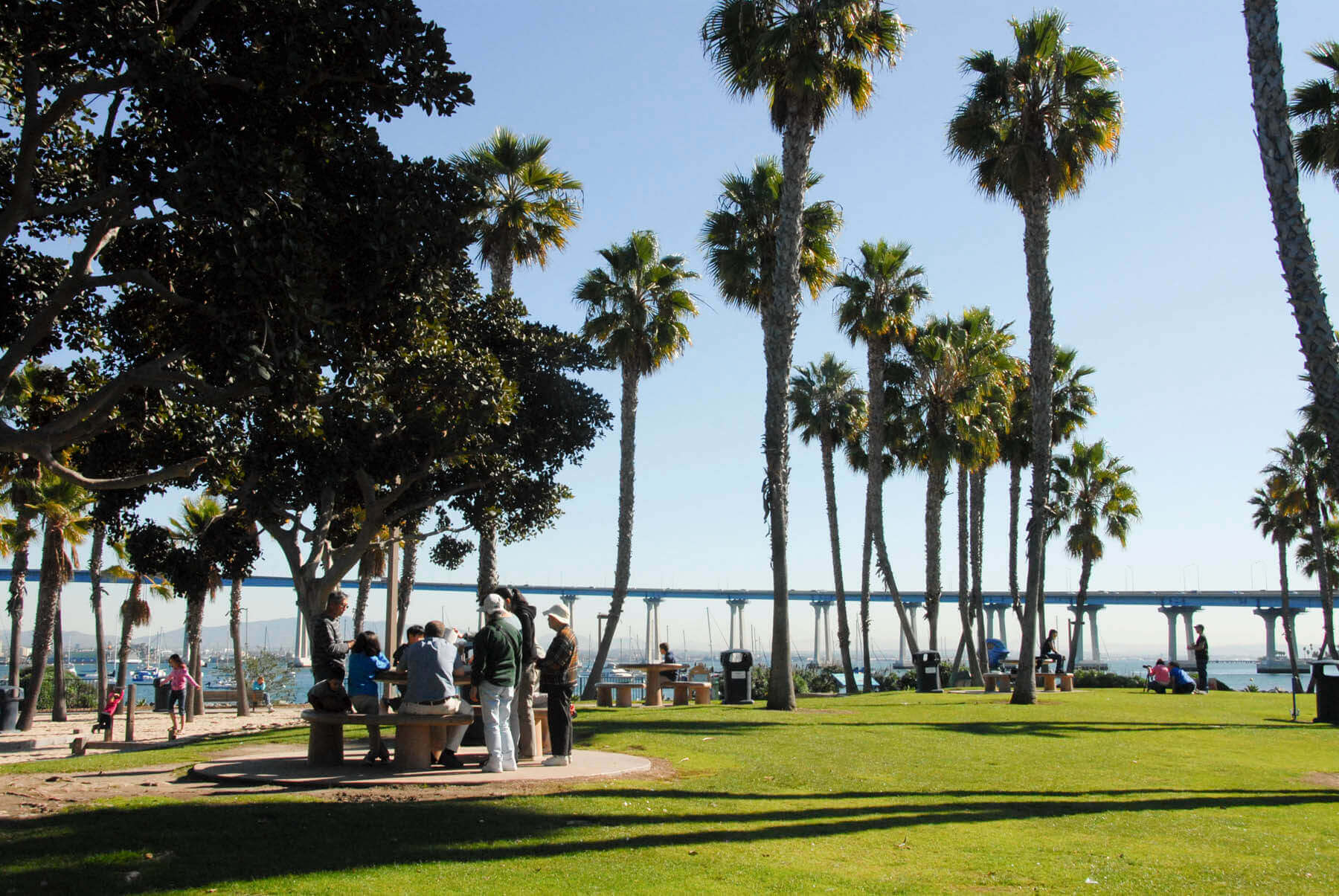 One of the most beautiful shoreline parks is Tidelands Park at Coronado Beach. Lush grass and spectacular views across the ocean and the bay make this location one of the most sought after in San Diego. The park is easily accessible via ferry from downtown and return, and the short trip across the bay is worth taking in itself, to view the San Diego shoreline. 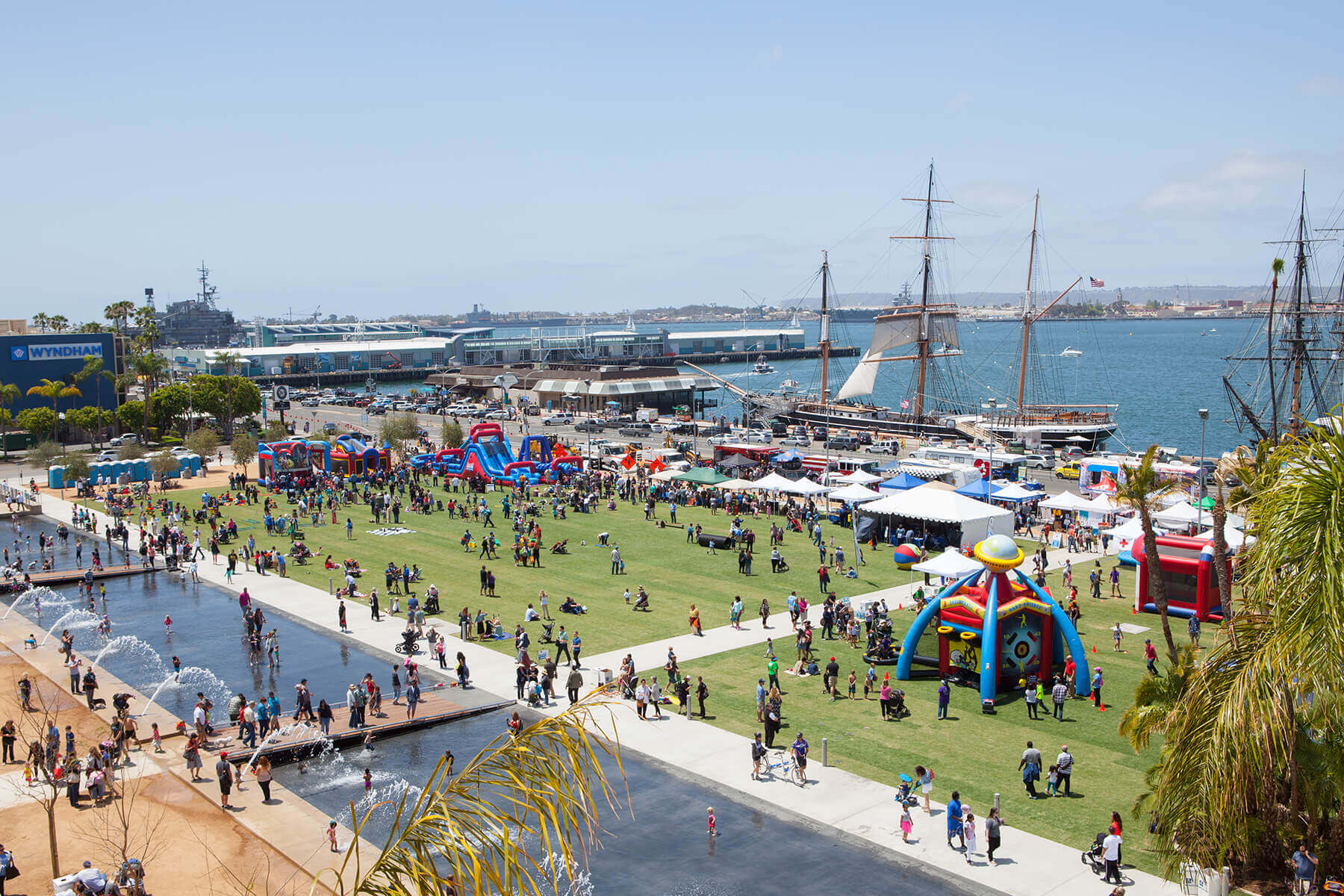 Waterfront Park has been redeveloped on a regular basis and now has a stunning large grassy area with playground but still retains it tranquility, as you can tell by the amount of yoga mats seen laid out across the park. There is a delightful shallow water feature with jet fountains to cool off on a hot day.After a lazy or fun day, head into Carnitas Snack Shack for some sustenance. 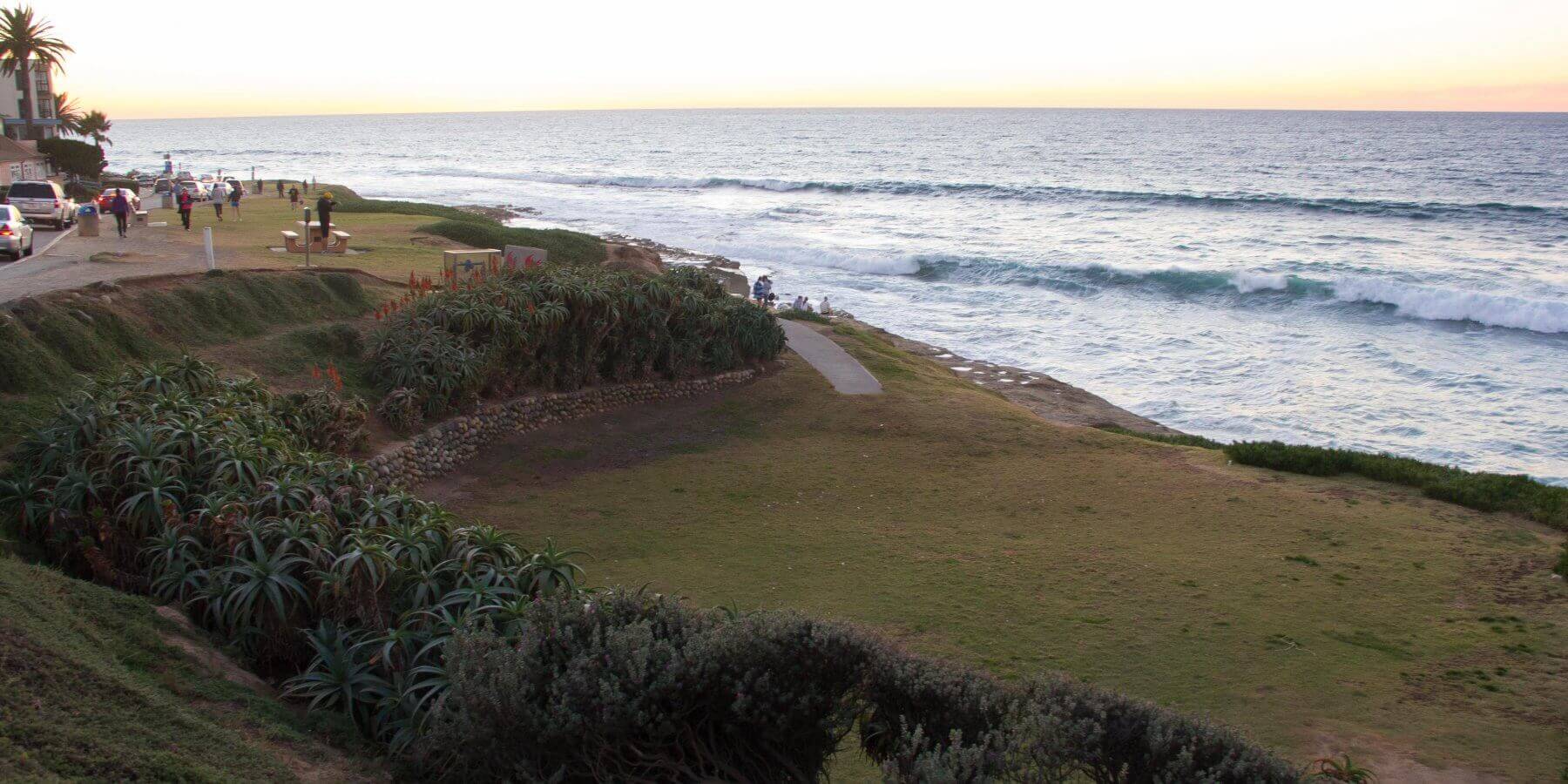 Cuvier Park in La Jolla is unique and unless you know it is a few steps down from the shoreline, you may miss it. Perfectly located opposite the San Diego Museum of Contemporary Art, you can sit and draw in the sea air accompanied by a spectacular view, or visit the museum before you spend the rest of the day lazing in the park or on the beach (perfect for the kids). You may even catch a romantic wedding – the park allows ceremonies once a day and because it is such a popular place, there is a lottery held for bookings! 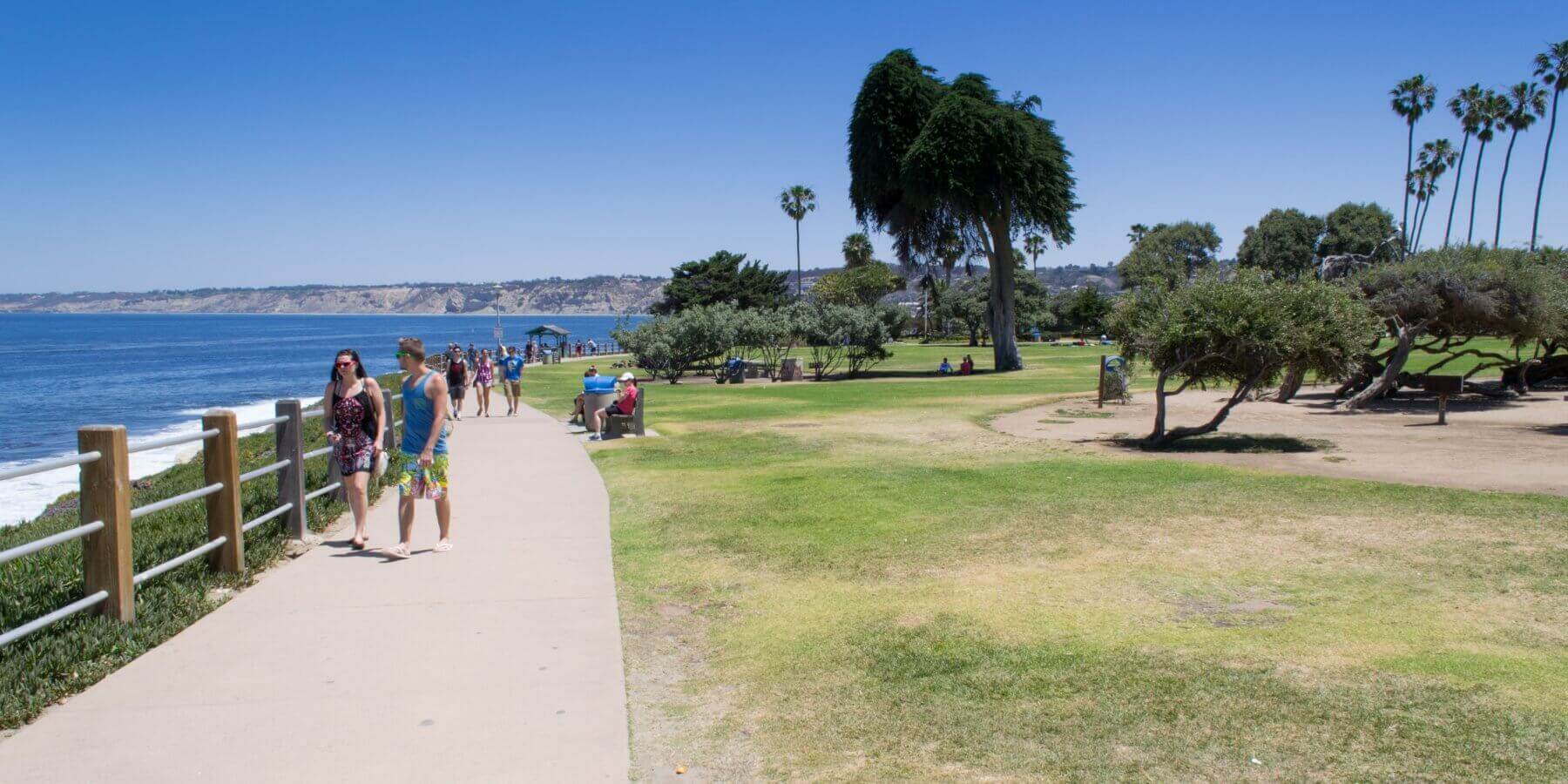 For the best of all worlds, Ellen Browning Scripps Park is your best bet for a full day of fun and relaxation, with three beaches to access and a large open grass area with picnic tables. This park is particularly great for the kids, as there is a cave to explore called Sunny Jims Cave, and entrance is through the cave store, which is full of curiosities. On the far side of the cave are spectacular views of the ocean. Probably one of the best parks for both beauty and interest. 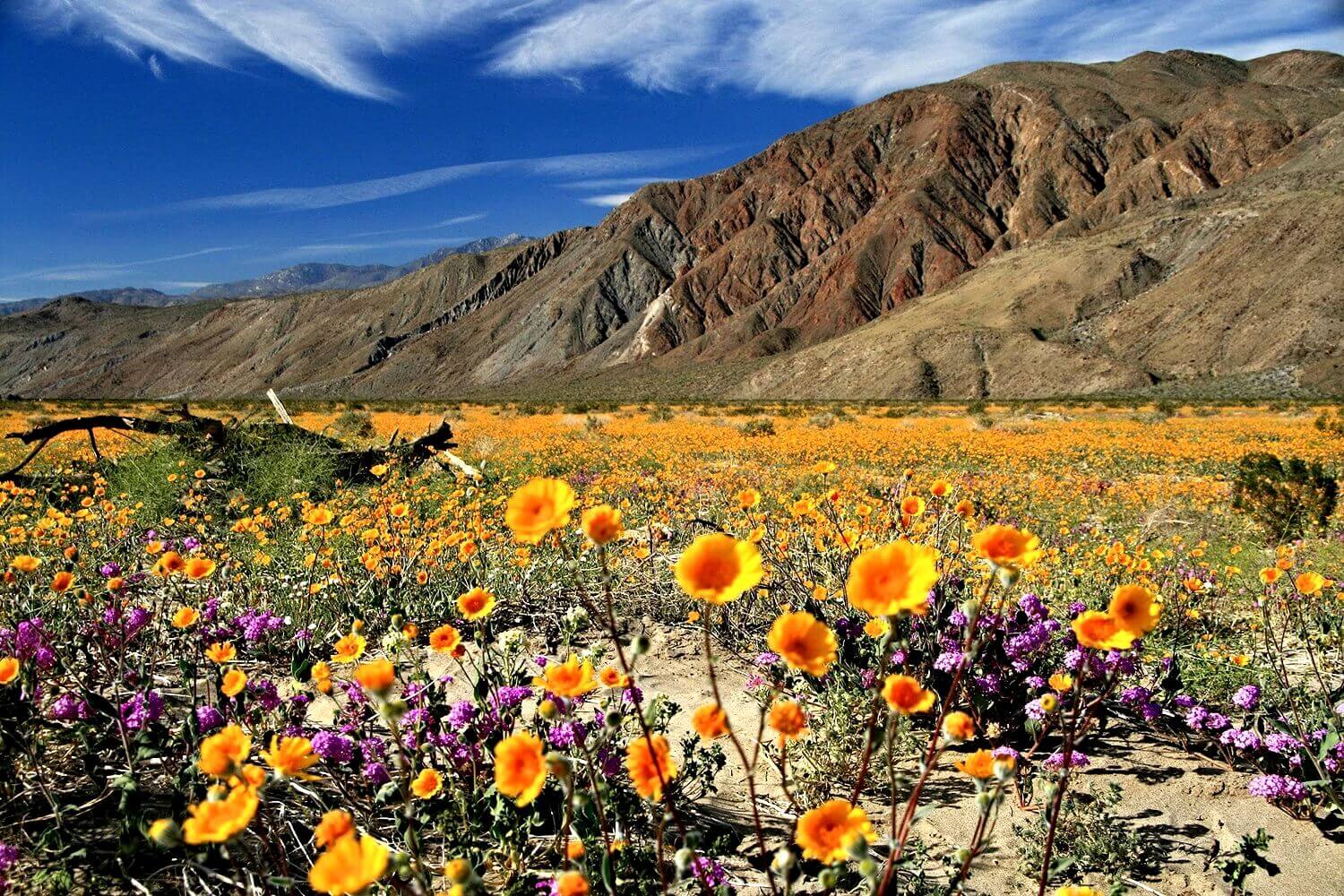 If size matters to you, be sure to investigate the Anza-Borrego Desert State Park at the edge of the city limits, the largest such attraction in the state of California covering over 900 square miles. You’ll find a dozen wilderness areas here and dirt tracks aplenty, making this the perfect place to spend an afternoon if you’re inspired to join in favored pastimes of San Diego natives such as cycling, running and hiking.

Enthusiasts of the latter will be particularly thrilled by the Cowles Mountain trail, which is every bit as scenic as it is potentially strenuous. If you just want to chill out, the quiet and atmospheric desert-style surroundings will certainly provide relaxation – it is frequented by those practicing meditation. 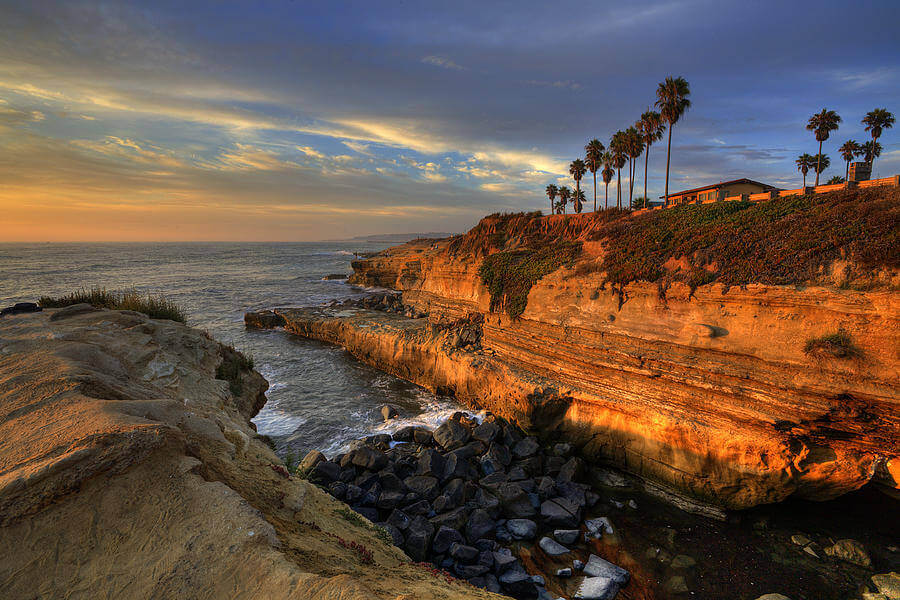 If the prospect of all that desert landscape has left you feeling dehydrated you could check out the 68-acre Sunset Cliffs National Park, which overlooks the Pacific and offers one of the most scenic views in all of San Diego.

The sight may be include the mildly terrifying presence of thrill-seeking cliff-divers, but you can also take a seat and relax as you watch whales swim throughout the ocean, or just take in the glorious vision of the San Diego sunset from your lofty vantage point; this spot is considered one of the most romantic throughout the city for a reason. You could also investigate the slightly more rugged Torrey Pines for a similar experience. 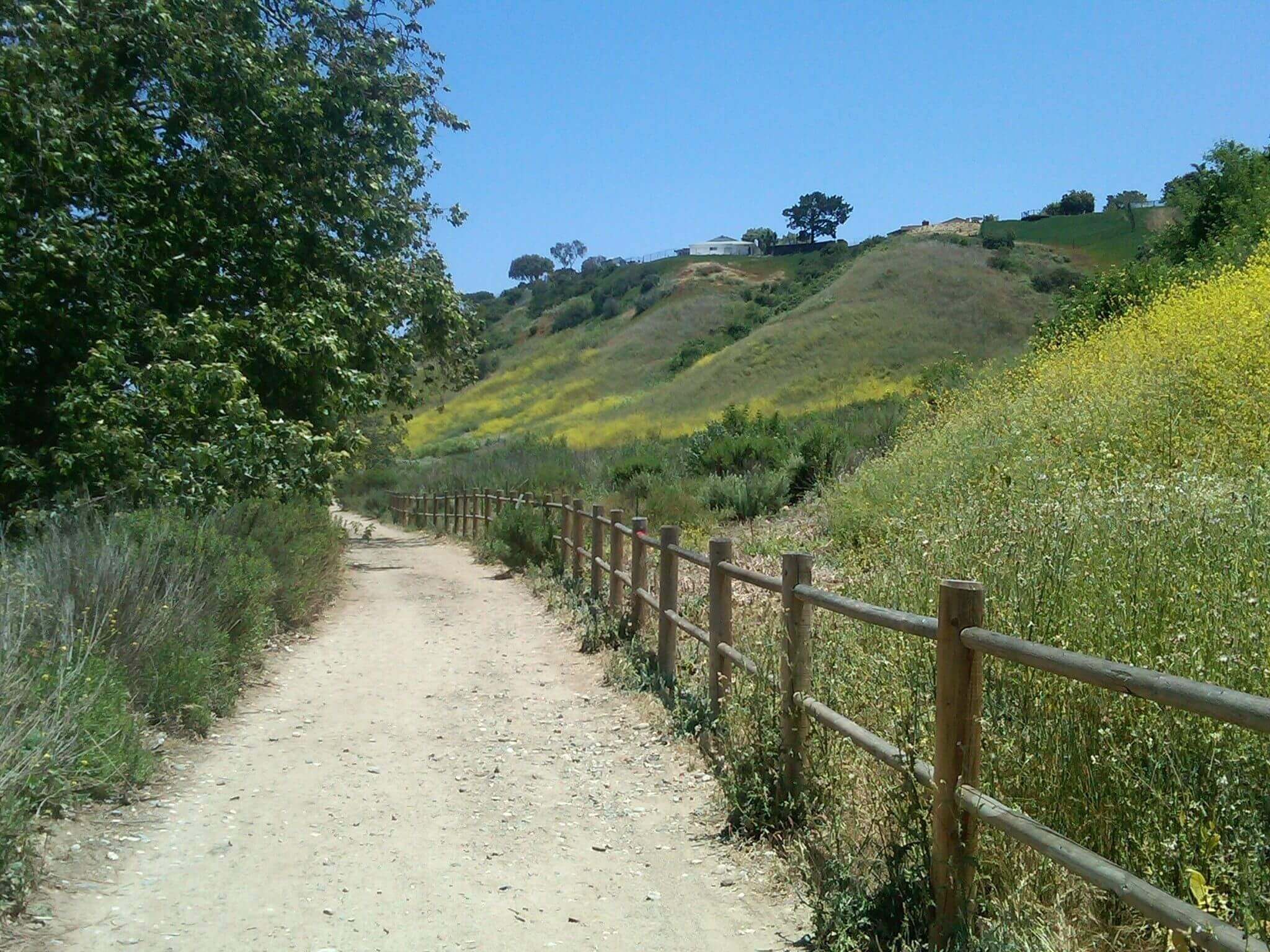 The Tri-Canyon Parks, consisting of Marian Bear Memorial Park, Rose Canyon Open Space Park and Tecolote Canyon Natural Park & Nature Center, are also a must-visit for anybody keen to experience the open spaces of San Diego. This trinity of open spaces make up over 1,500 acres in total, and the vast land mass offers something for everybody. You can go for a hike or cycle ride if you’re feeling active, pack your binoculars and observe the indigenous bird life if you are that way inclined, or simply sit back and bask in the Californian sunshine. 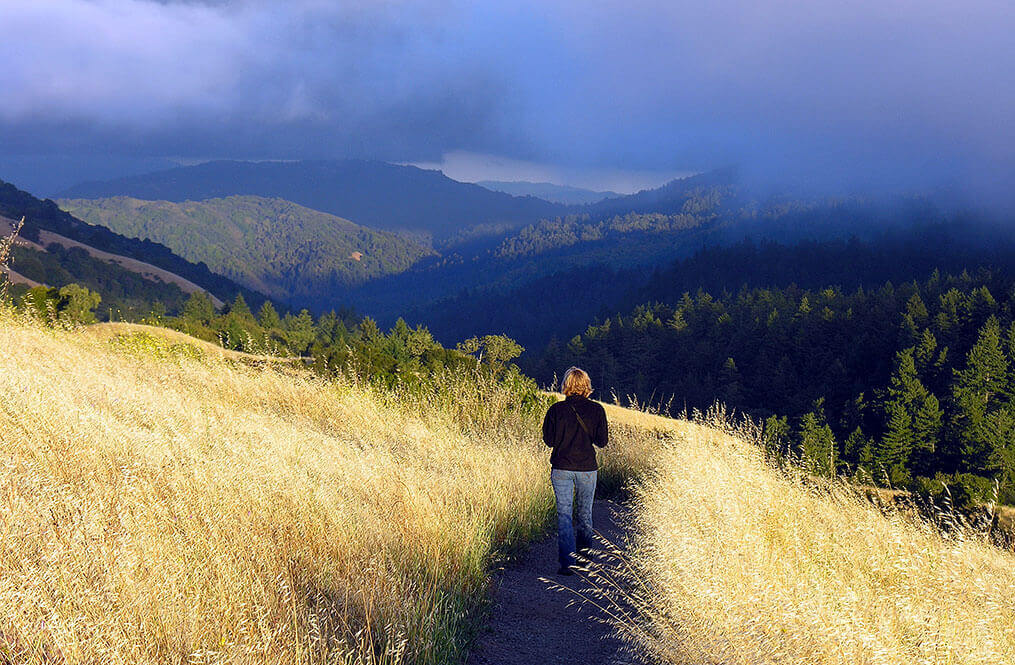 Head to the northern city limits and you’ll experience the Black Mountain Open Space Park, a monumental 2,352-acre area that make for be a heavenly visit for both botanists and animal enthusiasts. The California Lilac blooms in great density here, creating a beautiful wall of blue petals, alongside any number of berries, sunflowers, chamise and sage.

Be sure to look with your eyes and not your hands while in Black Mountain Open Space Park, however; all plants here are under the protection of local government, and picking flowers as mementos of your visit is strictly verboten. The same goes for bothering the various species of wildlife that call Black Mountain home, which include adders, bobcats, salamanders and over eighty different genus of birds (many of which are considered rare and/or endangered). 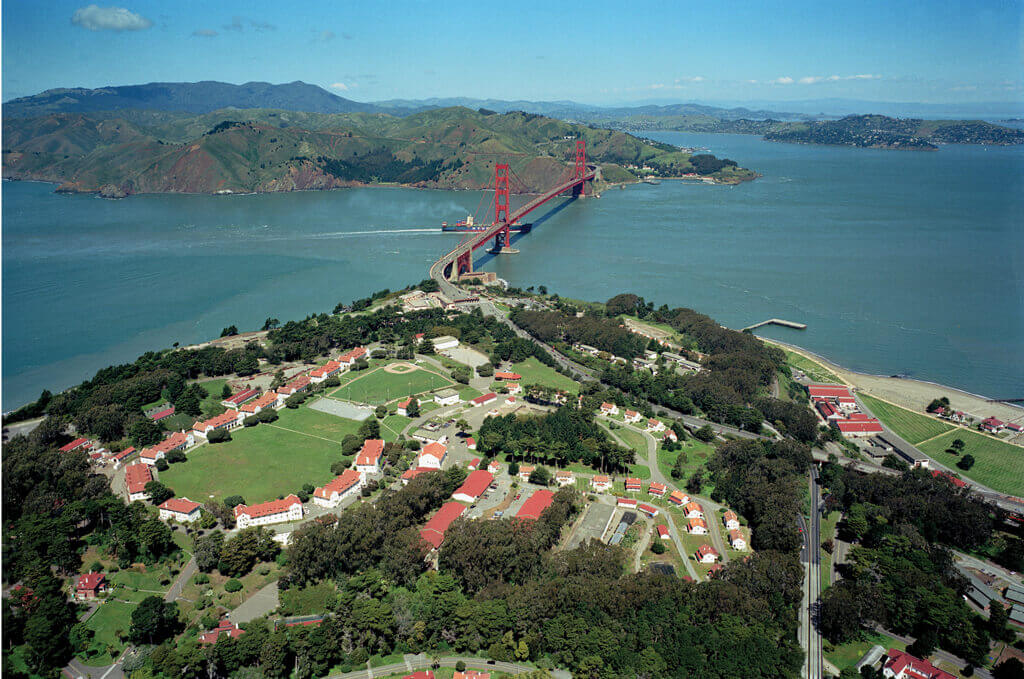 Many of the parks in San Diego are also steeped in history, doubling up as tranquil green spaces and tourist attractions. Presidio Park, for example, dates back to the 18th Century. Smaller than some of the more prominent green spaces in the city at 40 acres, this is a gorgeous picnic spot and less likely to be busy than the more well-known tourist spots dotted around the city – and also houses the Junípero Serra Museum, so you’ll have somewhere to escape and educate yourself should you find yourself caught in a downpour of rain. 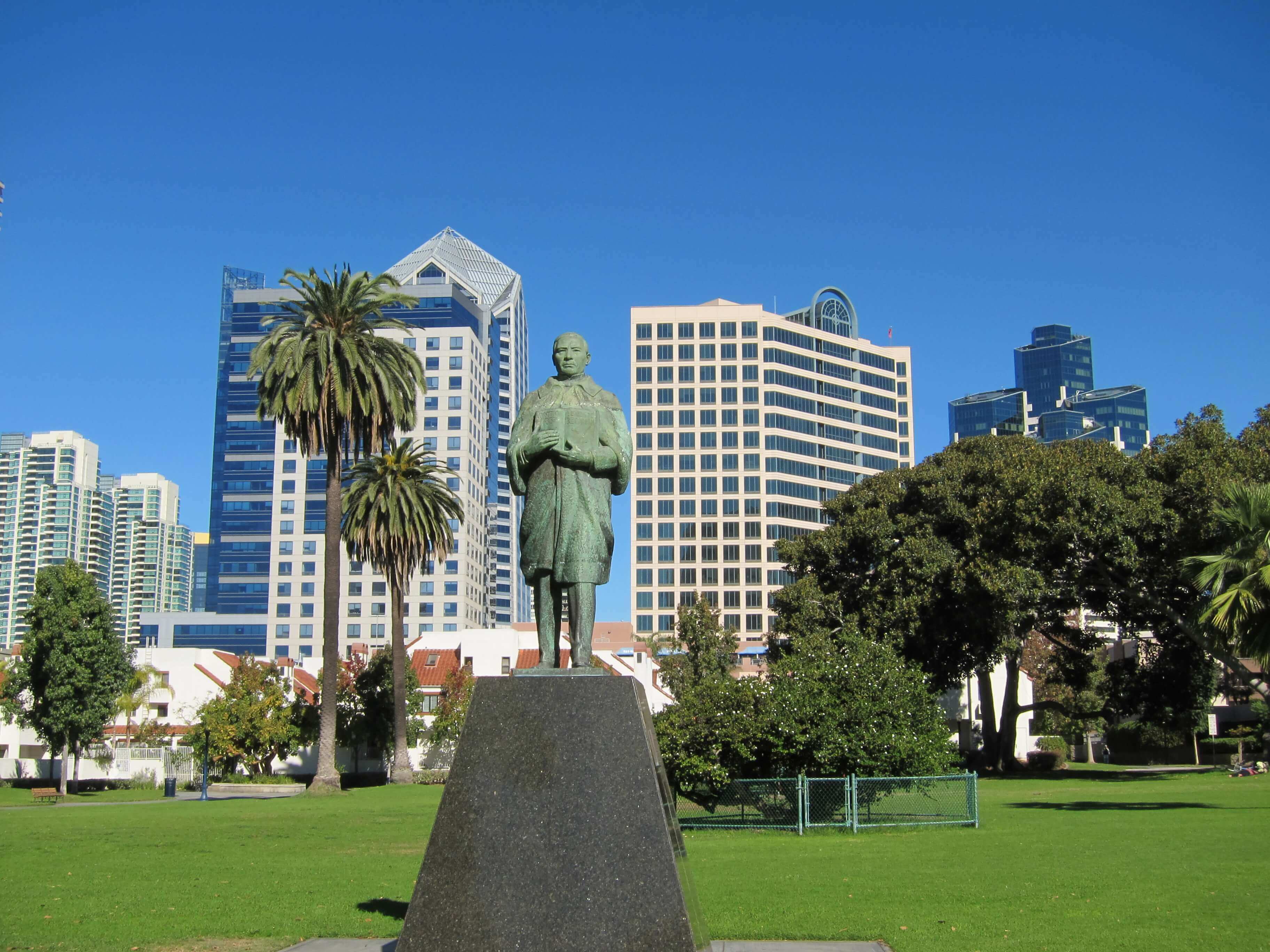 Pantoja Park is similarly venerable, boasting the status of the oldest park in the city and conveniently located in the downtown Marina. 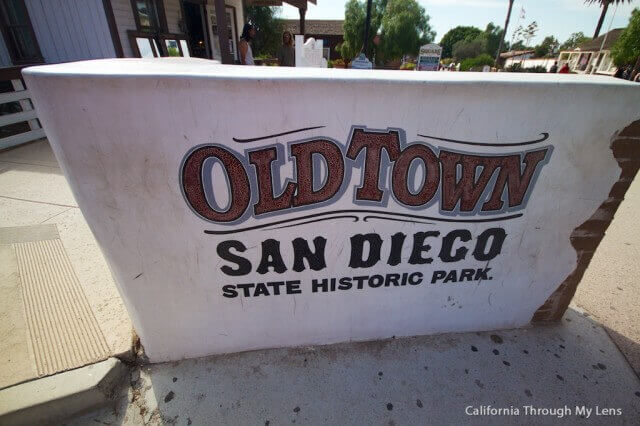 The Old Town San Diego State Historic Park, meanwhile, is one of the most popular outdoor destinations in all of California, painstakingly recreating the era of Mexican settlement in the early days of San Diego’s history. 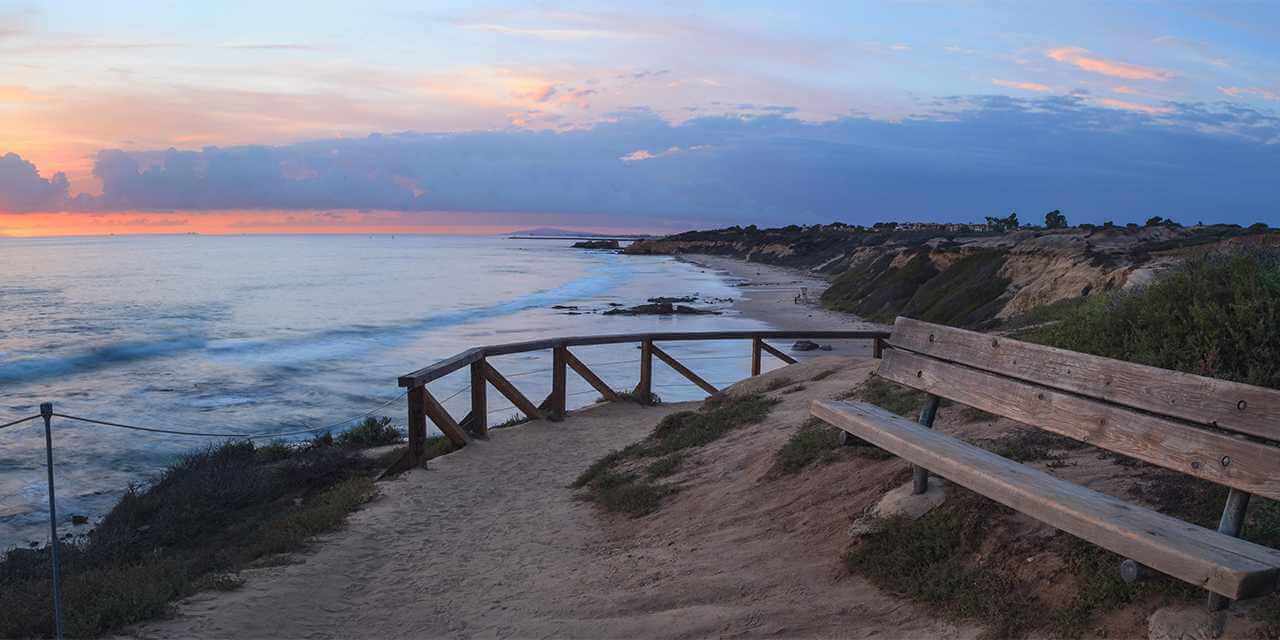 If you’re interested in marine life, try the Famous Slough State Marine Conservation Area (SMCA), which proudly hosts 25 acres of wetland alongside the San Diego River, or Children’s Park, which is found within Martin Luther King Promenade – a small but peaceful open space that plays host to an aesthetically-delightful fountain.

Amici Park, meanwhile is housed in the Little Italy district of the city, and while it’s a little more concrete-centric than green, there are few places more relaxing to sit back and sip on a cappuccino while watching the world go by. 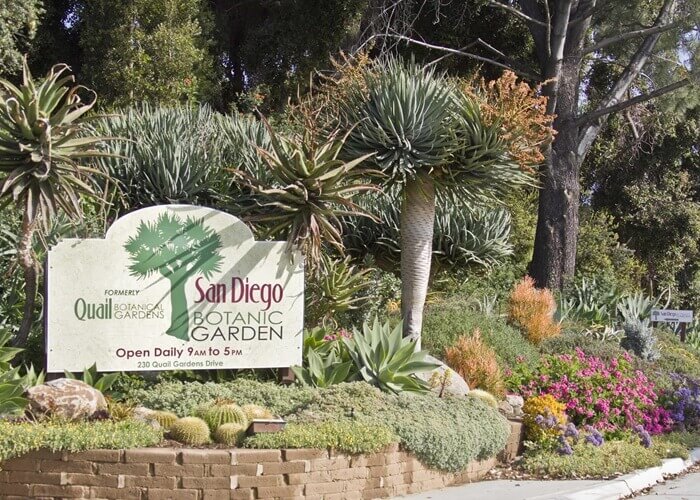 The San Diego Botanic Garden is a little further afield, involving a drive of some thirty minutes north of downtown towards Los Angeles, but it’s a wonderful experience. Over thirty different floral displays can be found in this popular attraction, representing flora from all over the world, as well as children’s play areas.

The Botanic Garden also has two natural areas which allow for a fine and mindful stroll through the region, and a trail to follow that will reveal secrets of how Native American settlers used the plant life found in San Diego for medicinal and lifestyle purposes. 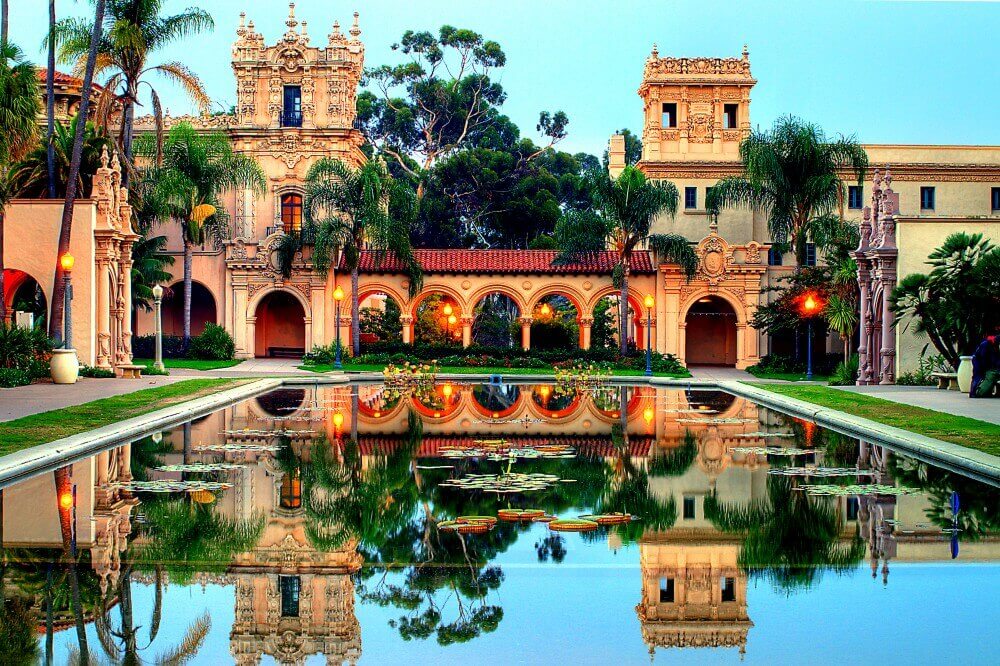 Of course, it’s impossible to discuss the greenery of San Diego without at least touching upon the many and varied elements of the sprawling Balboa Park. Two of the most interesting elements for anybody seeking an open space experience are the Botanical Building – a substantial dome that plays host to over 2,000 different forms of flower and the delightfully peaceful Lily Pond, which is one of the most oft-photographed sites in the state – and the Japanese Friendship Garden.

This site closes a little earlier than most, with the final admission being at 4.30pm, but it’s a truly breathtaking tribute to the bond between San Diego and it’s sister city of Yokohama. A stroll around these gardens, taking in the sights, smells and sounds of the varying plants, ponds and water features, will soothe even the most troubled of souls, and the sight of cherry blossom in full bloom is something that everybody should experience at least once in their lives.

You can almost imagine that you are straight into a film set in many ways, or transported to Japan itself. Without doubt, if you are an avid horticulturalist, this is a ‘must see’ on your San Diego trip.